In the previous post, I wrote about how migraines and the medication for them interfered with my running.  I had no sooner overcome that problem than I had to face another-


To be honest, my idea of a bike ride is that it should ideally include a pub lunch!  In June 2012, I set off on just such a ride and at some point made the stupid move of trying to pull my gloves out of my pocket and put them on my hands, whilst cycling round a roundabout.  This resulted in me bumping up the kerb, losing my balance and ending up on a heap on the floor.  My knees and elbows were deeply grazed, my bike helmet (thank goodness I was wearing one) had a deep scratch down the side of it and my right foot bent back at a ridiculous angle causing instant pain over the top of my foot and ankle.  On reflection, I realise I must have been in shock, because I managed to bike home, shivering and sweating all the way with my left foot doing all the pedalling and my right foot just being carried round by the pedal.
﻿﻿

Chris and my brother, Ian wanted to take me to hospital, but I didn’t think it would be that serious.  We cleaned up my wounds and I went for the RICE treatment (Rest, Ice, Compression, Elevation). By Sunday morning, my foot was painful, black and blue and swollen to about twice the normal size. I couldn’t even put my foot on the floor without excruciating pain – and I don’t say that lightly.  We went to A & E, where I had an x-ray, which proved inconclusive due to the swelling.  I was potted up and given crutches and told to return on Tuesday.  I was given a plethora of pain relief which seemed to make me very happy!

When I returned to A & E as instructed, I had further x-rays but the doctor was still unable to tell if anything was broken because there are so many lines on the bones of the foot.  He referred me to the orthopaedic consultant who said that at some point we have to stop scrutinising the x-rays and have a look at what is going on with the actual foot.  After a thorough examination, and after he had then scraped me down from the ceiling (!), he said it was highly likely that there was a small fracture and certainly there was a lot of soft tissue damage, which would be causing most of the pain.  Result?  In a pot for 3 weeks, no weight bearing, keep foot elevated as much as possible.

Vicky was working from home at the time and the rest of the family also ran around after me and friends visited, during my 7 weeks off work.  The Queen’s Jubilee Celebrations were televised, which also helped ease the monotony. But I’m not kidding you, the weeks I spent on the sofa in the front room with my foot up, it seemed like the world and his wife took up running and decided to run past my house just to spite me!  I got very sulky from time to time and felt very sorry for myself.

After the pot came off, I was still on crutches for another 3 weeks and it took a good few weeks to walk unaided.  Running was out of the question for a while so I had to ‘get back on the bike’ literally as well as proverbially.  I was very nervous to start with, but in the face of not being able to run and wanting to try to restore my fitness levels I pushed myself and increased the distances I was riding gradually. Chris gave me a lot of encouragement, especially at the times I was struggling to bike uphill and saying “I’d much rather run it!”. Eventually I took part in the 2012 St Andrew’s Hospice Charity bike ride.  This was 70 miles and laid to rest the ghost of the previous year’s failed attempt.

I managed to start running again in October.  Well, I tried in September, but it was just too soon and I ended up swelling and limping.  From October, I started again, this time seriously and sensibly – a walk round the village and a very gently granny-tap between 2 lamp posts.  I increased little by little; even so, every run hurt and there were clues that I was still overdoing it. If I had a run where my foot didn’t hurt too badly, I would find my left knee and hip painful – sometimes really badly, due to over compensating. Nevertheless, I managed the 2 mile Lincoln Santa Run in December.

My running buddy, Sue bought me a sports massage for Christmas, which I had in January.  I was expecting it to hurt, having seen Sue nearly jump off the bed when she had her treatment!  It didn’t hurt; I could feel pressure and there was a bit of pain over my foot – having said that, I probably really tensed it as soon as he looked at it!  I’m a bit of a cynic and wary of the placebo effect so I didn’t know whether the massage had helped until I walked down stairs and didn’t hear my knees, ankles and hips clicking.  They would normally  be very clicky on climbing or descending stairs after a run, but this was much improved.  I now swear by sports massage as a body MOT and have found a good sports massage therapist locally.  More about this another time.

I got back up to the distances we’d been running pre-injury by January 2012 and by the end of January Sue and I had done a 10 miler.  On a bit of a whim, we’d also signed up for a half marathon at the end of February... and more about that in a future post.

Since being able to run again, I’ve hardly been out on my bike.  It’s not that I’ve fallen out
with it because of the accident, it just doesn’t float my boat like running does.  This is a shame, because in order to reduce the likelihood of injury, it’s helpful to include some alternative exercise to use different muscles.  I will make myself have a go some time and / or go swimming. I am really keen to look after myself well in the lead up to running a full marathon.  Doing everything I can to avoid injury has to be a priority – especially having experienced a forced break in running. 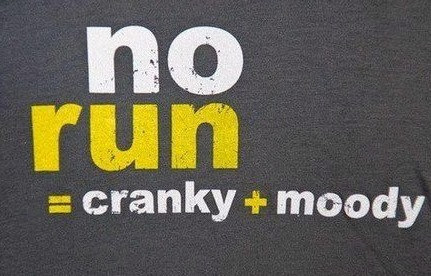