The best laid plans of mice and men... 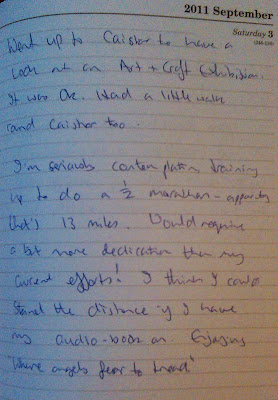 I was 48 when I decided that I wanted to run a half marathon before my 50th birthday.  I remember clearly the moment the seed was sewn.  Chris and I were in the Pie Pub (AKA the Yarborough Arms at Ulceby) with friends;  Cheryl asked how the running was going and then Baz asked, “are you going to do a marathon then?”  I said that I definitely wasn’t – for one thing, the thought of running for 5 hours or more (26.2 miles) seemed just impossible and for another thing, I don’t think I could hold my bladder that long!  Then the conversation turned to “a half marathon”. I still didn’t think I would have a go at that.  Someone in the company said, “think of what an achievement that would be though,” and the seed was sown! I found my old diary recently and saw my first reference to the possibility of a half marathon. 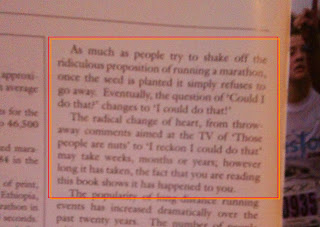 I didn’t mention it to a soul for ages, because I didn’t want to say I was planning it until I felt that it was actually a possibility of it, but once the seed was sown, it was never going away!  I later bought a book 'The Marathon and Half Marathon: a Training Guide', (by Graeme Hilditch) and found that this is a common experience.
The minute I decided that I would aim for a half marathon than I started to hit a few difficulties.  I overcame them and actually ran 3 half marathons before my 50th birthday this year and another one shortly after. I’m now training for a marathon, so I thought it was about time I wrote a bit more about the journey to my first half, the setbacks I’ve overcome and and the lessons I’ve learned along the way.

I was gradually increasing my running distance and intensity – sometimes with my running buddy, sometimes on my own, short runs, longer runs (by this, I only mean up to 5 or 6 miles but it seemed a long distance at the time).  All was going well.  But in September 2011, I started to experience frequent, severe migraines, with horrible visual disturbance, excruciating head pain, numbness down my limbs on one side, slurred speech, confusion and sickness.

I’ve experienced migraines before, mainly in my teens. In adulthood,the migraines settled down to about 2 a year, only increasing again during each pregnancy and then settling again to 1 to 2 a year.

But this time, I was having a really bad attack every 2 to 3 days.  I kept a migraine diary, which unfortunately revealed a correlation between hard runs and severity of symptoms. I never mentioned this correlation to anyone. I think there was a bit of denial; I didn't want to believe that over-exertion was a factor.

After about 3 weeks of this, with no let-up (and when I ended up having time off work) I went to see my GP, who prescribed Propranolol – a beta blocker.  I was surprised, because working in mental health, I know Propranolol as an anti-anxiety medication, but it turns out that it is also often prescribed for migraines (as well as some other conditions).  My GP suggested I should take the medication for 6 months, based on the hypothesis that the increased migraines might be due to ‘age related hormonal changes’ and that hopefully it was just a ‘phase’. I can see his rationale for connecting it to hormonal changes (given my age) because previous increases in migraine attacks had been during puberty and pregnancy - both a time of hormonal change.

I was told that common side effects were cold hands and feet, severe fatigue and weird dreams.  That didn’t worry me, I couldn’t carry on as I was.

Relief
Within a week, the severity of migraines reduced and within three weeks they stopped altogether.  My hands and feet were very cold, especially at night so I just took to wearing socks in bed.  The dreams were not too bad, but the fatigue was awful.

But the down side...

On a day today basis, I just felt tired, but when I tried to run, I just seemed to have no power in my legs. I couldn’t believe it! I kept thinking it must be ‘in my mind’ and kept trying again and again.

I would set off, only at a steady jog and in less than half a mile I’d be out of breath and in a few more yards my legs just would not move. I really mean it - it was as thought they were weighed down with lead. I remember on one occasion I could barely manage to walk back home and by the time I got home I was crying tears of frustration.

I had been doing a bit of cycling, more as a ‘leisure’ thing than anything, but with the added benefit of helping with fitness.  I had to pull out of a Charity bike ride for St Andrew’s Hospice  after only 3 or 4 miles because I just couldn’t make my legs go round!  I was gutted, as I was biking it with Chris, Sue (my running buddy) and her mate Aidy and we’d planned it for weeks. I was really shocked at how I could function mentally, but physically, I just felt rubbish.

After 6 weeks, I was due to see the GP for a review and told him about the level of fatigue and asked if I was imagining it.  He was not at all surprised and explained what was going on:  Beta blockers slow down the heart rate,  When we exercise, our heart rate increases in order to pump the blood around the body and take oxygen (the fuel for every cell in the body) to the muscles in order for them to respond.  So, when I exercised, my heart was trying to increase (as normal) to get the oxygen to my legs, but the beta blockers prevented my heart rate from rising. So my heart rate stayed low and the blood couldn’t pump the blood (and therefore oxygen) around my body to meet the demands of running.  I was grateful for the explanation- at least I wasn’t making it up!

As the migraines had stopped, my GP suggested that I reduce the medication on a trial basis – just not taking a tablet on running days.  He explained that the Propranolol is slow release so one tablet gave me a constant dose over a 24 hour period.  It has a short half life, so, once the 24 hours are up, it would be completely out of my body after another 4-6 hours. I should then be ok to run, and could then take a tablet after the run.  He said that if I remained migraine free at that dose, wait a few weeks then reduce to every other day.

So that is how I proceeded and was able to continue training.  I took to wearing a heart rate monitor so that I could prove the validity of what the doctor had said.  There was a huge difference.  My heart rate for a reasonable, steady run is about 145 bpm.  On a medication day, no matter how hard I ran (or tried to) my heart rate didn’t get above 126 bpm. No wonder my legs wouldn’t work!

When I reduced the dose I only had a couple more migraines on ‘non tablet’ days, and the symptoms were only mild and not prolonged.  So after about 4 months I reduced the dose (with my doctor’s agreement) to every other day.  During this time, I was also losing weight (click here to see how) and running was feeling a bit easier.  I was also reading about training for a half marathon and paying more attention to nutrition, hydration, warming up, stretching and building up intensity / distance gradually.  When I came off the medication after 6 months, I was just over a stone lighter and much fitter and healthier.  I do push myself, but I believe that there is less strain on my body.  Whether over-exertion had anything to do with the migraines or whether it was hormonal changes I can’t be sure. I’m just happy that this was a temporary setback and I haven’t had an attack since early 2012.
Next time .... my poor foot!
Posted by Fran at Sunday, November 03, 2013