The one that (nearly) got away.

There is a saying – “any fool can run, but it takes a special kind of idiot to run a marathon!”  So, how crazy does that make someone who books their first marathon, and then books their second marathon for the week after?  Well, that’s exactly what Rachel did – signed up to Mablethorpe Marathon, scheduled for 1 October and Hull Marathon on 24 September.  I was already entered in both – to support Jo-Mo at Hull and Cheryl at Mablethorpe.  Cheryl decided to defer her entry to next year so Rach and I decided to train for and run Mablethorpe together. 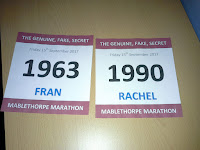 As it happened, Mablethorpe marathon was cancelled, due to illness of one of the organisers.  You’d have thought that we would have breathed a sigh of relief, wouldn’t you?  But, oh no!  With help from Chris and Andrew, we immediately started planning how we might run the marathon route regardless! After all, it would be a shame to waste all that training!  Initially, we thought we would run it on the day the actual marathon was scheduled, but eventually decided to run it sooner.  We kept it quiet, continued the training and over a few weeks, it grew into .....

So, there was one secret going on, in that we told hardly anyone of our plans.  And then there were other plans afoot in the background, to make this experience as good as possible and as much like a real race as possible, for Rachel.  Andrew organised medals, I made race numbers and goodie bags and Chris got some boozy prizes to present at the end.   On top of this, Andrew secretly let Laura in on the secret, so that she could appear near the finish as a surprise!  I’m feeling quite emotional thinking about this.

We arrived in Mablethorpe to start our race at the same time that the actual race was due to start on the day, 9.00am, with Rach and I ready to run, and Chris and Andrew with bikes to be our marshals, route planners, water / fuel carriers and general all round supporters!  Andrew had the route – from Steve Green’s Strava map when he was the official course measurer, so we were all good to go. 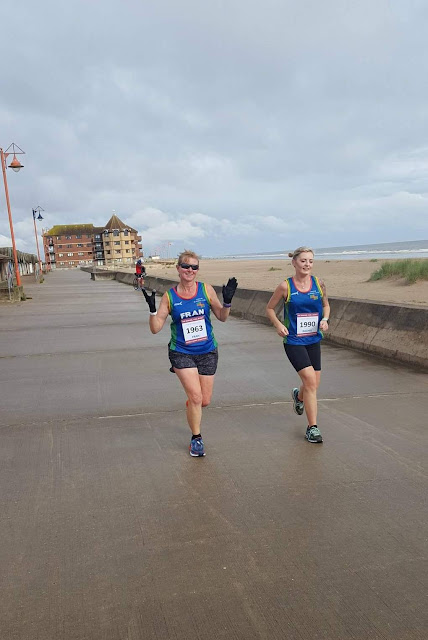 Andrew was Race Director and Chris was the Official Starter. Three, two, one, go ... and we’re off!  Our plan, as in training was to run the first 3 miles and then go over to 3 minutes run, one minute walk strategy.  Initially the weather seemed perfect as we did a little loop of Mablethorpe including the high street and then headed down the sea front towards Sutton-on-Sea.  We have run in some baking hot weather in training, and had some difficult runs because of the heat, so we were pleased for a cooler, more comfortable day.

We had an early route change when we realised we would be heading down a main road and that this might be dangerous for 2 runners and 2 cyclists close together on a busy Friday.  It would have been different on the official race day as the road would have been closed 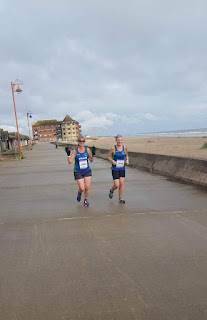 As we turned to come back towards Mablethorpe for the first time (the marathon is a two lapper), we turned into a light head-wind and realised why it was so easy-going the other way.  Rachel was going really well and we had a chat at that point about how to deal with the wind. We decided to try to walk really briskly on the walk sections so that we didn’t have to stress about trying to run hard against the wind on our run sections.  Chris and Andrew were absolute superstars, managing to get a few photos, constantly checking we were ok and giving us drinks / gels / jelly sweets so that we didn’t have to think very much.
I think we were all relieved to turn back towards Sutton to get the wind behind us again.  We were fascinated by the chalets – some basic and some very up-market, and on the second lap out I jabbered to Rach about them to help take her mind off the inevitable fatigue that was beginning.

We could tell that the wind was getting up more because with it behind us we were being pushed along – but when we turned around for the second time, it was horrendous.  Then at some point, it started to rain, and come down quite heavy.  I didn’t feel too bad but I really felt for Chris and Andrew on the bikes.  It’s difficult enough to keep warm on a bike whist pedalling fast, but cycling at our running pace must have been awful.
We knew we had to extend the run along the prom for a few more miles (because of detouring away from the main road) and at one point, I thought we could just run up and down the prom.  However, the wind was just making it extremely difficult – it’s a wonder Rach didn’t get blown away!  It was hard to even keep moving forward at all.  So Andrew re-routed us back into the town, adding a loop here and a street there to keep us out of the wind and at one point riding off ahead to see how far back to the car park so that we would hit 26.2 miles at the right point.

Rach can’t manage energy gels and shot blocks, and can only take a limited number of jelly sweets.  With about 5 miles to go, I could see she was tiring and she couldn’t manage any more jelly sweets as she was feeling a bit sick. It had now stopped raining and the sun came out  a blessing for our dedicated bike marshals, but making it suddenly hot for us, and sapping Rachel’s energy further.   I jabbered and chatted to try to keep her distracted, but even as I said, at the 23 mile point, “only a parkrun to go”, I knew that it would still seem a very long way to Rachel.   I can’t express enough what a big deal anyone’s first marathon is.  It’s so true when seasoned marathoners tell us, “you have to respect the distance.”    I talked to her about who would be the first person she would tell when we were finished.  She said that she was calling to see Laura on the way home so would tell her.  I secretly sniggered, knowing that Laura was already somewhere in Mablethorpe! 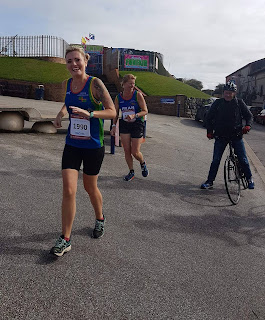 As we ran up Mablethorpe High street for the final time, we had about a mile and a half to go.  We had mooted the idea, when training, of running the last mile but at this point we decided to keep up the run-walk strategy as it was getting really tough.  But as we got to the end of the High Street, there was Laura!  PERFECT timing – absolutely perfect.  I was using Strava Beacon and Laura was tracking so she knew roughly where to find us.  Bless Rach – she stared, in total shock, and said, between sobs,  “there’s Laura! – How did..?” then turned to us and said, “... did you know?”.  Awww, bless her – proper runner’s brain.  But how this perked her up!  FANTASTIC!  She ran all the rest of the way and had a smile on her face.  Chris and Andrew rode on ahead once they knew that we knew our way back, and as we turned into the car park, there they were with a finish tape of Lincolnshire flag bunting. 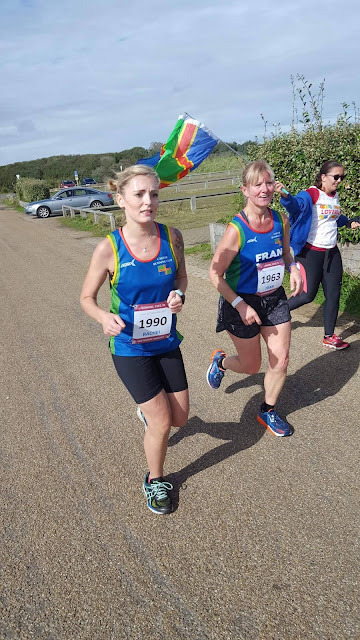 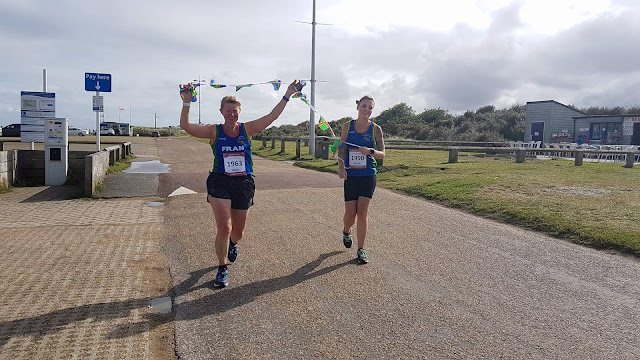 I can’t tell you how proud I felt at the end and how emotional it was as we crossed that line hand in hand and as Rachel’s Garmin ticked over to show 26.2 for the first time ever. 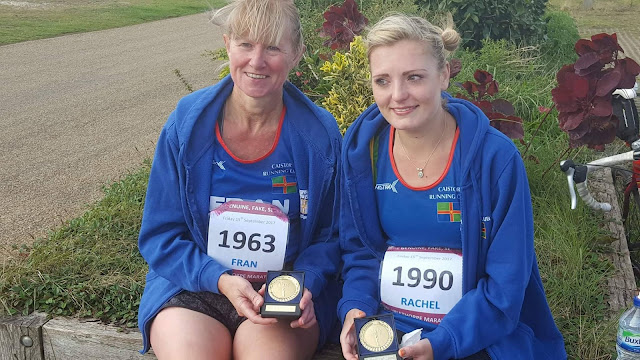 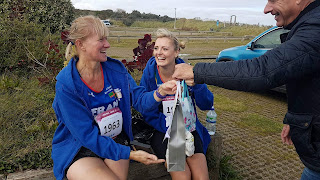 Lots of hugs all round followed..... and then medals and prize-giving.  Rach was overall winner and I won my age category!  We had a feeling we might win!

We popped into the cafe on the car park for a drink and a bite to eat and further post-race chat. The cheese bun I had was the best I've every tasted.  Sometimes it's like that after a long run, if the only fuel has been gels and sweets.  Rachel looked tired but pleased and I was really happy that we’d managed to make an occasion out of it, following the disappointment of the official race being cancelled. 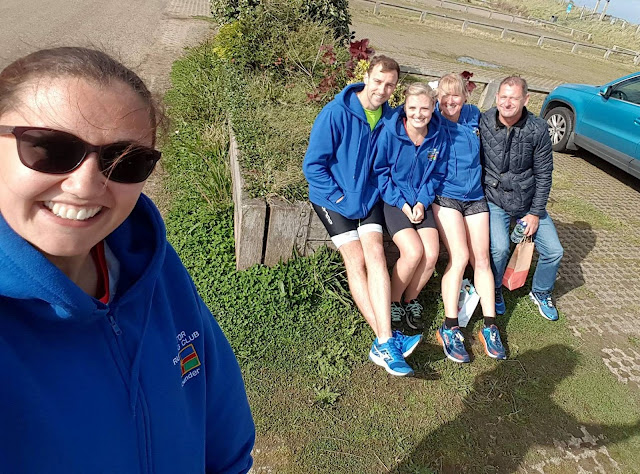 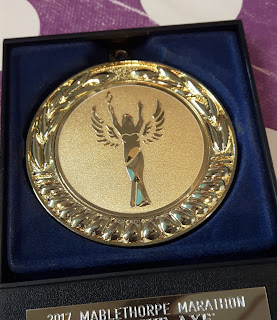 I have to end by thanking Chris and Andrew once again for supporting us both in this.  The weather was awful for you and you just got your heads down and got on with it.  Thanks for the medals and prizes.  Thank you Laura for coming out to support Rach, on your birthday, no less – it really made that last mile and the finish extra special.


Having completed her first marathon, Rach would go on to complete her second one, just nine days later – see ‘A hat trick of marathon debuts – part 3 – Jo Mo. 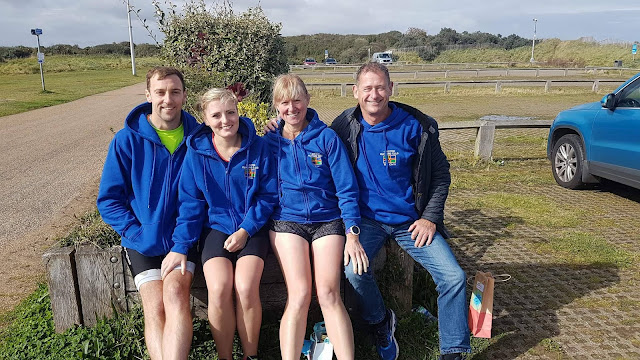 Next up Jo Mo does Hull Marathon
Posted by Fran at Sunday, October 22, 2017