I make no secret of the fact that I get a kick out of seeing other people succeed in their running, whether this is one of our fast club runners achieving a new PB or someone completing their first parkrun.  More than anything though, I like it when I can be involved – for example, just being on a run with someone who is completing their longest distance to date. It’s a great feeling to experience their delight at their achievement.
This year, I have had the privilege of running alongside 3 people as they completed their first marathons.  These were 3 very different experiences and I wouldn’t have missed any of them.

This happened by accident really. I had signed up the Blackpool marathon and Chris decided to do the training with me with a view to entering the marathon if the training went ok.  I had the idea that Chris might bring my pace along (he is a bit quicker than me) and I might be able to encourage him on the distance, having already had the experience of 26.2 miles.  In the event, by the time Chris decided he’d enter, Blackpool was full!  So I deferred my entry to 2018 and we both entered Boston, which was a week earlier.

We initially started our training running all the way, but became fascinated by the run-walk (3 mins run, 1 min walk) strategy when we noticed that on a 16 mile run, Sarah had completed it on a run-walk strategy in about the same time that we ran the whole thing.  Sarah was training for Rotterdam marathon.  We did a walk-run with Sarah and Mike (about 18 miles as I recall) and it felt so much better – not easy, but easier.  You still have to cover the miles, but there’s something helpful about the legs having a different motion every 3 minutes.  In addition, psychologically, it breaks it up.  We decided to have one more 16 mile run and then decide whether to switch.  At that point, Chris’s thinking was that running another ten miles on top of that seemed pretty daunting, but run-walking it seemed much more manageable.
So we completed the training on the run-walk plan, helped along by being able to join Sarah on some of her runs and by having other people join us for part of some of the longer runs. This helped to break the runs up a bit.  On our longest training run, we did 4 miles with just the two of us, then met Jo-Mo for 6 miles, then a couple of miles on our own, followed by the rest of the run with Nadine. It helped the miles fly by.

Throughout the training Chris was plagued with some niggles and bits of pain that came and went.  I think this was simply a product of increasing the mileage but it probably  wasn’t helped by some of the training routes I planned.  On a 22 mile run, perhaps running uphill from the Salutation at Nettleton to Caistor Top at about 15 miles in wasn’t the best idea!  Fueling was difficult too and the whole process was a learning curve. Chris already knew from experience that he didn’t get on with energy gels and even shot blocks gave him upset stomach. Eventually he settled on jelly babies and some soft jelly sweets from the Spar shop.

Boston (UK) is a marathon, a half marathon and a fun run (3k).  Jo-Mo told us quite near to race day that she had entered the HM, which would mean that she could run with us for about the first 6 or 7 miles (after this, the route split so we would have to part company).  Strangely, although the Marathon and HM started at the same time, the start point for the half, was about 500m behind the start point for the marathon.  This was bad enough for fast runners, such as Andrew, who had entered the HM, trained for a good time and then found himself quickly catching and then having to weave through the slower marathoners before finding any open space to effectively start his race.  For poor Jo, it was possibly even worse.  Although Chris and I were doing a run-walk strategy, we had decided to run the first mile.  We planned to do this steadily, but you know how it is when you get carried along with others!  Jo could very soon see us, but catching us was a different matter – she got her mile PB that day, just trying to meet up with us.  She said that by the time we’d done a mile and were on run-walk, she would just about reach us when we were walking and then we’d start running again! 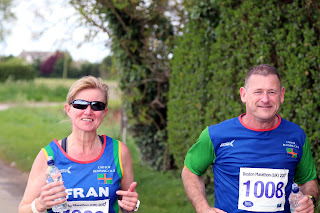 Things went quite well while we were with Jo although I could tell by Chris’s face that something wasn’t quite right.  It turned out that a familiar niggle in his knee had surfaced at mile 2, so this was a bit worrying.  By the time we reached the point where Jo would leave us, he was in considerable pain, but reported that it didn’t hurt whilst he was running, only when he was walking.  Jo reported afterwards that when he said that, a look of horror appeared across my face as it dawned on me that I was going to be running  a lot more of this thing than I had planned to.

We said our goodbyes to Jo-Mo and I asked Chris what he wanted to do.  “It’s OK while I’m running. Shall we just run?”  I said, “OK then” and probably managed a smile, but was thinking, “oh shit”, because this would mean I was going to be pushing myself to keep up with his ‘steady’ pace.   After running a couple of miles I was relieved to see Team Bates and get some encouragement; “you’re making good time, aren’t you?” from Claire ... Ian taking photos and getting some hugs and smiles from Martha and Edith. 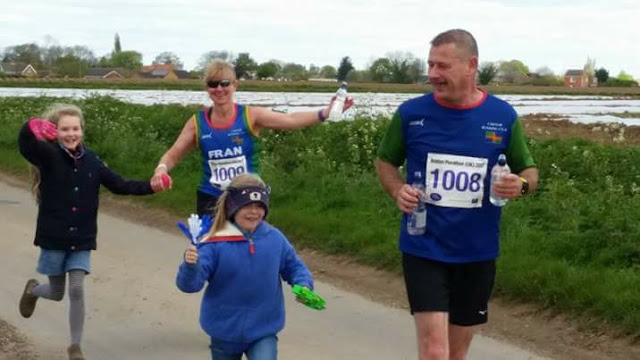 Then we ploughed on.  We ran some more miles.  And then ran some more.  It was too fast for me, but Chris was going well.  He was able to talk, I could just about grunt.  I asked him to talk about something to distract me and he told me a story about when ‘a sixteen year old girl met a seventeen year boy’ and how they got together... and got married... and what happened after that.... leading to how we ended up running a marathon together.  Well that was it! I was in floods!

It was good to see Chris going so well, but I was at the end of myself.  Thank goodness for seeing Team Bates and John Rainsforth on several occasions for some more distraction.  Lots of me was aching, I knew a blister was forming.  “Just focus on your elbow”, I told myself. “It doesn’t hurt!”

We reached a water station with about 5 or 6 miles to go and I just had to have a little break to take on a gel and have a drink.  I had a little breather, thanking the marshals and getting ready to dig in again. Unfortunately that stop was Chris’s undoing and I regret it now. On reflection, when he was going well, I should have just told him to carry on by himself and then slowed down to a more comfortable pace for me.  But hindsight is a wonderful thing, isn’t it?  We had always planned to run it together so that’s what we did.  When I stopped, Chris stopped to a walk and just paced there until I was ready to go (less than a couple of minutes – maybe only a minute) but then when he tried to start running again, the pain was severe.  The rest of the race was a combination of his knee seizing up or giving him pain depended on whether he tried to run or walk. We had to walk most of the last 4 or 5 miles with the odd run interspersed.  The last couple of miles were never-ending and his head started getting in the way, especially once he realised we wouldn’t crack 5 hours, which had been what we hoped to achieve fairly easily.  He’d be the first to admit that he saw his arse!  I, on the other hand, was feeling full of energy now I’d had a rest.  What a bizarre run! 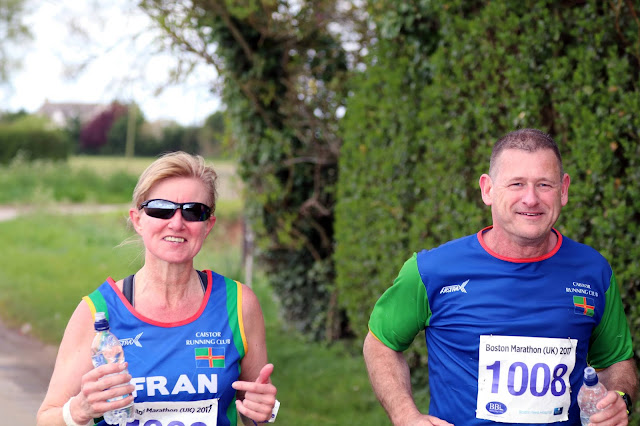 With about a mile to go, we came out into a kind of village green area.  There were no marshals, not signage and 3 possible ways we could have gone.  That was a miserable moment. We looked at the few other runners around us and everyone was shrugging their shoulders (so it wasn’t just me with my total lack of a sense of direction!).  Luckily, there was a chap with his family, spectating and eating ice cream (I always remember they were eating ice cream)  who pointed and shouted “that way.”   Chris kept trying to run, but was now also out of energy and to be frank, quite fed up.  He was already saying, “I’m not doing another one and I’m pulling out of Dukeries”. 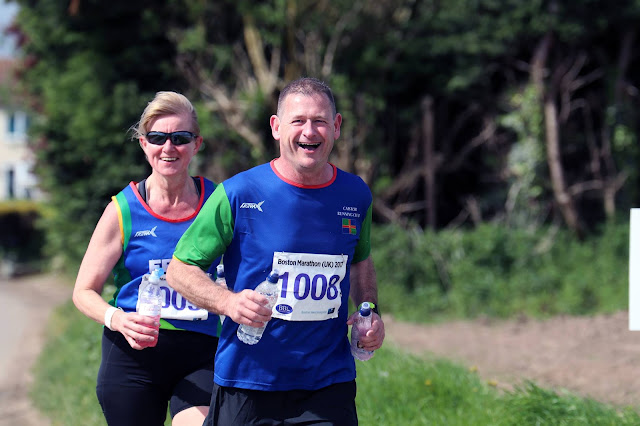 Eventually, after what seemed like hours, we turned a corner and could see the familiar sea of blue CRC hoodies - such a welcome sight at the end of any race.  I said something like, “look, look, here the all are, come on, let’s run this last bit....” and we came in to shouts cheers and cameras from our running buddies and friends .... Jo-Mo and Chris, Sarah and Mike, Rach, Laura, Andrew, Baz and Cheryl, and Team Bates (Claire, Ian, Martha and Edith). 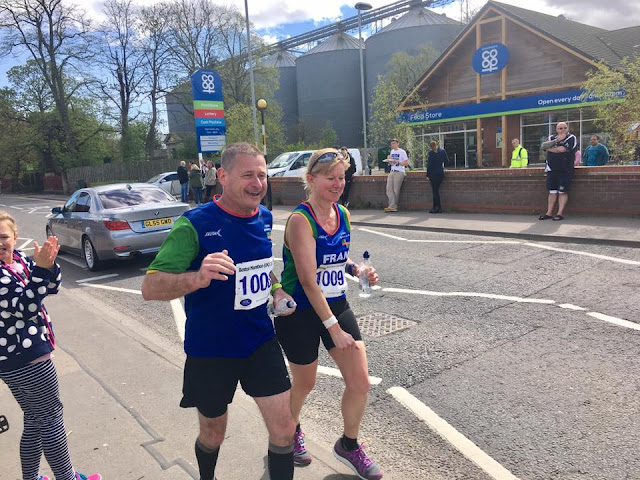 After the finish, Chris was still insistent that he wasn’t doing another marathon and was pulling out of Dukeries, but this was a knee-jerk reaction (no pun intended) to having dealt with quite a degree of pain, as well as feeling quite faint at the finish (I’m not going to harp on about this bit as he doesn’t like a fuss about it and these issues are now resolved).
The day after, he went out and bought a Lay-Z-Spa and as we chilled out in the tub a few days later, he started to come round.  A month later, he ran his first Ultra – Dukeries 30 with Sarah and me and declared it much easier and much more fun than a road marathon.