There’s nothing like a the first episode of a new series of Dr Who to send me scurrying for my lap top and get on with a blog post.  So, here we go with my 7th Half Marathon – the Humber Bridge Half; my second running of this particular race.

The weather conditions couldn't have been more different from 2013. Last year, it was baking hot sunshine and only the odd white fluffy cloud in the sky, making me very grateful to a resident on the route who offered a much needed cool down from a hose pipe.  This year, as we drove across the Humber Bridge to the Race HQ, it was already drizzling with rain. By the time we got parked up, it was raining heavily. Cheryl came along with Chris  to support and it crossed my mind that it was a shame that it was such bad spectator weather.

As we walked from the car to the assembly area, I was trying to phone and text Sue, who was meeting us there.  But with a touch screen phone, it was hopeless.  Even when she rang me, I couldn't answer because my fingers just slid off the screen.  Luckily, we met up in the assembly area, more by luck than judgement.  I briefly had a look round for Rob J and Mike J and family from CRC, but seriously, visibility was so poor, it’s no surprise I didn't see them

Ablutions over, we headed out from under the umbrellas that Chris and Cheryl had brought and took our places in the crowd of participants at the start line.  The rain was heavy and we were right royally soaked within a couple of minutes.  Although the temperature wasn't really cold, we were starting to get chilly at the start which was delayed by 15 minutes because the rain was so heavy.

I was hoping to beat my time from last year (just under 2:10) and a bonus goal would be to finish sub 2 hours.  As usual, I set off steadily and just settled in whilst the hoards of people past me. I planned to run the first mile at about a 10 minute mile to warm up and then pick it up from there.  On that basis, Sue (who has done very little running this year due to not training for any triathlons) said she’d run with me for the first mile.  However, after the first 5 mins, she was telling me to jog on, so we went our separate ways.
As always, the first 3 miles were the worst while I was warming up, but luckily the first 3 miles of this run are relatively easy, so it balanced out.  The first mile is on the north bank, then it’s over the bridge, southbound.  Once over the bridge, with about 3 miles done it’s a long steady incline up to the roundabout into Barton.  I took the unusual step (for me) of taking my first gel at the bottom of that hill, to boost me up it.  As I ascended the hill, I started to pass people – some who were walking, some running steadily – and sent out a mental thank you to Caistor Running Club for all the hill practice. The next five miles or so is around Barton and even though it was still raining, the support from spectators was amazing – loads of people shouting encouragement and clapping and plenty of kiddies offering hands up for a high five!

My play list included many Status Quo and Madness tracks.  Not much in common except that they both have a really good bouncy uplifting beat for running.  Somewhere between mile 6 and 7, ‘Baggy Trousers’ came on.  I found myself bouncing along and noticed that it felt easy.  That lead me to reflect on what I had been reading in ‘Born to Run’ by Christopher McDougall about running Easy, Light, Smooth.  Here’s the snippet I was thinking of ... but I recommend you read the book.

Once the Barton bit was done, it was a long flat straight, including under the bridge and the approach to Gravel Pit Road – AKA Cardiac Hill.  If you want to know more about the route, click here. Suffice to say that Cardiac Hill ‘does what it says on the tin’: raises your heart rate. This is the bit of the run that nearly broke me last year and it was the bit I was dreading!  I knew what to expect though, and made sure I took on another gel in good time for a boost.  I kept ‘Easy, Light, Smooth’ in mind and cracked on to myself that I didn't care about the hill and willed myself to just float up it as though it wasn't really a hill. It worked - it didn't seem as bad as last year.  I think it had stopped raining by this point but although I was still wet, I was very hot; I welcomed the cold wet sponges being handed out half way up the hill and just squeezed a couple straight over my head.

This year, the hardest part of the run was going back over the Humber Bridge, northbound.  It seems longer on the way back!  Seriously, there’s quite a long incline on the approach to the bridge from the south side and then of course, the incline continues to the middle of the bridge.  At this point, I was struggling to keep my legs going, but just kept my eyes on the middle of the bridge and reminded myself it’s all downhill after that.  I had one of those ‘sod the time – I'm not bothered as long as I finish’ moments and realised that my gadget (MapMy Run App) hadn't spoken to me since mile 4 or 5 and I’d completely not noticed.  I remember that when it last spoke, I was running just over 9 minute miles so I just hoped I’d maintained a decent pace..... and then realised that I was bothered about a time after all!  After I passed the centre of the bridge and with a mile to go, I pulled out my phone to send Chris and Cheryl the pre-prepared ‘one mile to go’ text and found my phone flashing ‘low battery’ at me. Marvellous!  I tried to send the text, but it wasn't happening. I just had to hope they’d guess roughly when I’d be in.

As I turned into the finish area I pulled out the usual short sprint finish, overtook 3 people just before the finish line – including one chap in an orange T-shirt who I remembered passing me on the second half of the Bridge.  So that made me well happy.  I glanced around for the timing clock, but there wasn't one!

Then I saw Chris and Cheryl and posed for my finishing photo.  I was shattered, but had really enjoyed the run, but was pleased it was over.....all the mixed feelings at the finish. 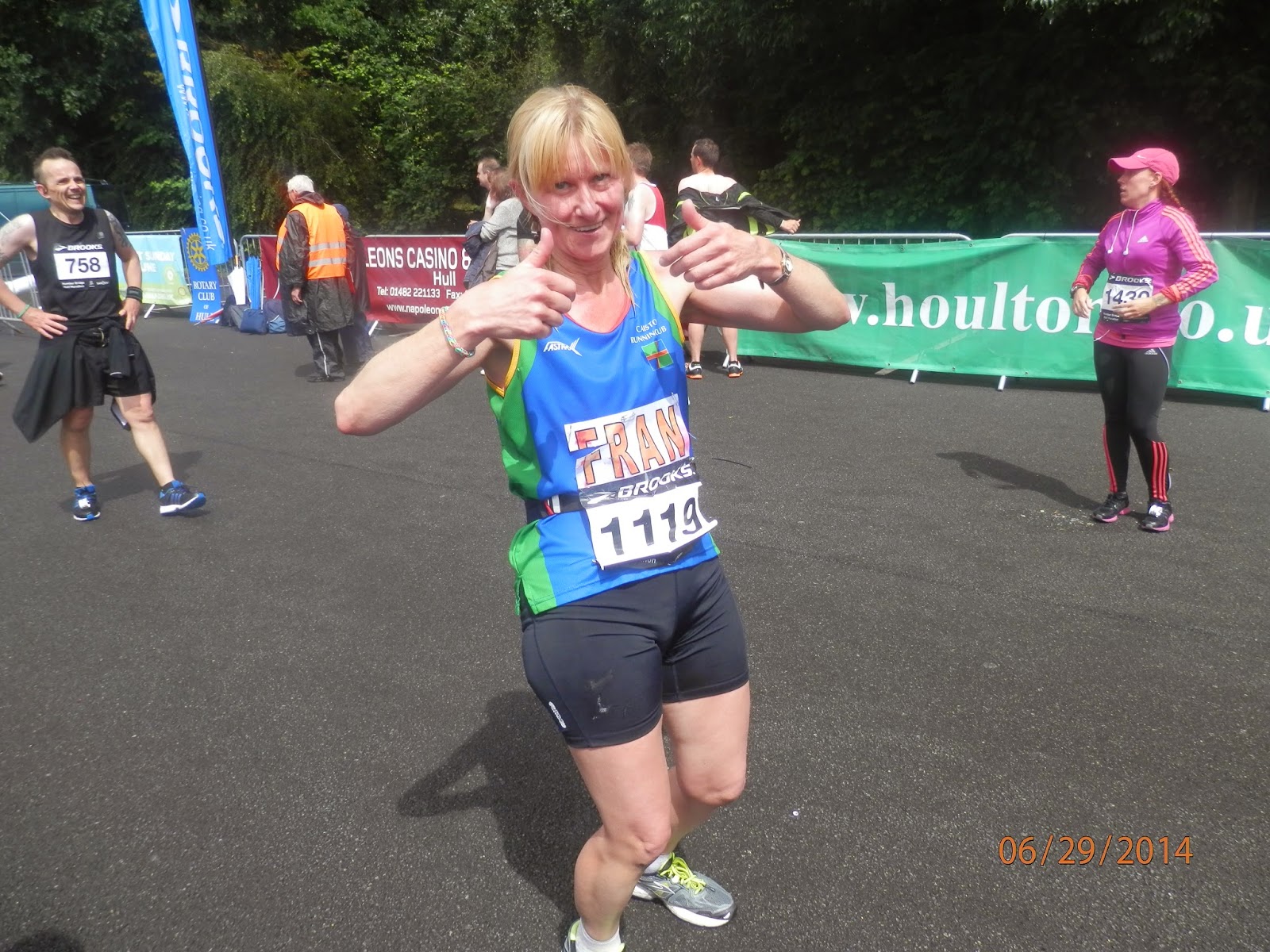 There was a place to go to punch in your race number and get your time.  I put mine in and found 2:00:59 Gun time and Chip time. What???? This cannot be! I was delighted to have knocked 8 minutes off my time from last year, but I knew there was certainly a minute between the start gun and me crossing the line.  I object! I demand a recount! My chip time HAD to be different! Calm down dear ... it turned out that at that time everyone’s chip time and gun time was listed as the same – the chip times came out later. Phew! When I received my official time later it was 01:59:25 – in there by the skin of my teeth J
I had seen Mike and Rob in the goody bag queue ahead of me – and Sue was in soon after I’d got my breath back.  As I said, Sue hadn't been training all that much and hadn't run the Humber Half before.  She was buzzing at the finish – just pleased to have completed it, run all the way, especially up the infamous Cardiac Hill, so when she got her time, she was satisfied with it.  However, she was even more pleased when I pointed out to her that she’d knocked 4 minutes off her time from North Lincolnshire Half last year, and this is a much harder course. 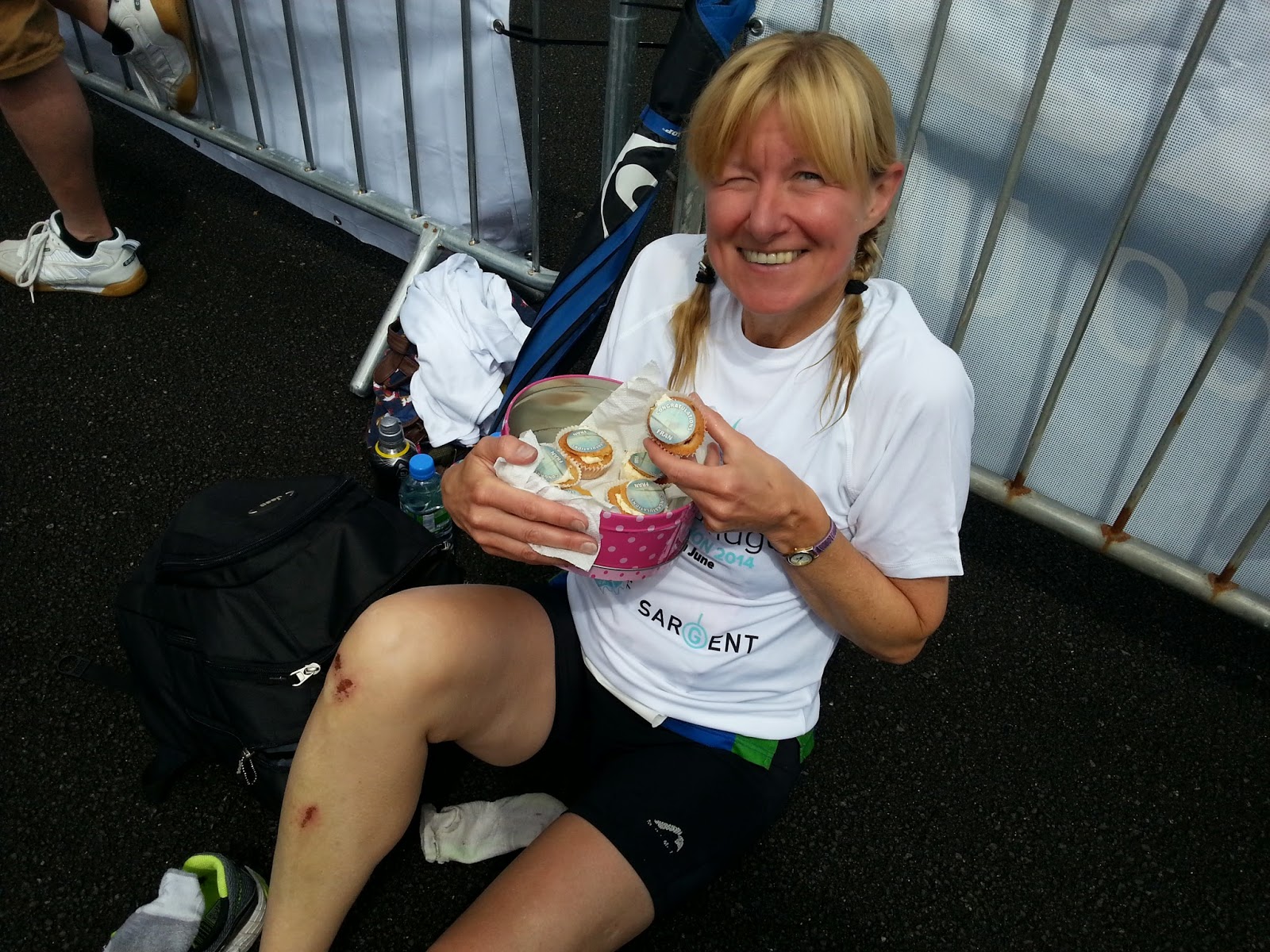 To round the morning off perfectly, there was Cake!  Sing it with me ..... “...that’s  what friends are for... la la la!” Cheryl had made little fairy cakes with a Humber Bridge decoration on them. These were much appreciated by me, Sue and the CRC posse.

And it wouldn't be a Half Marathon if there weren't some Running Poses: 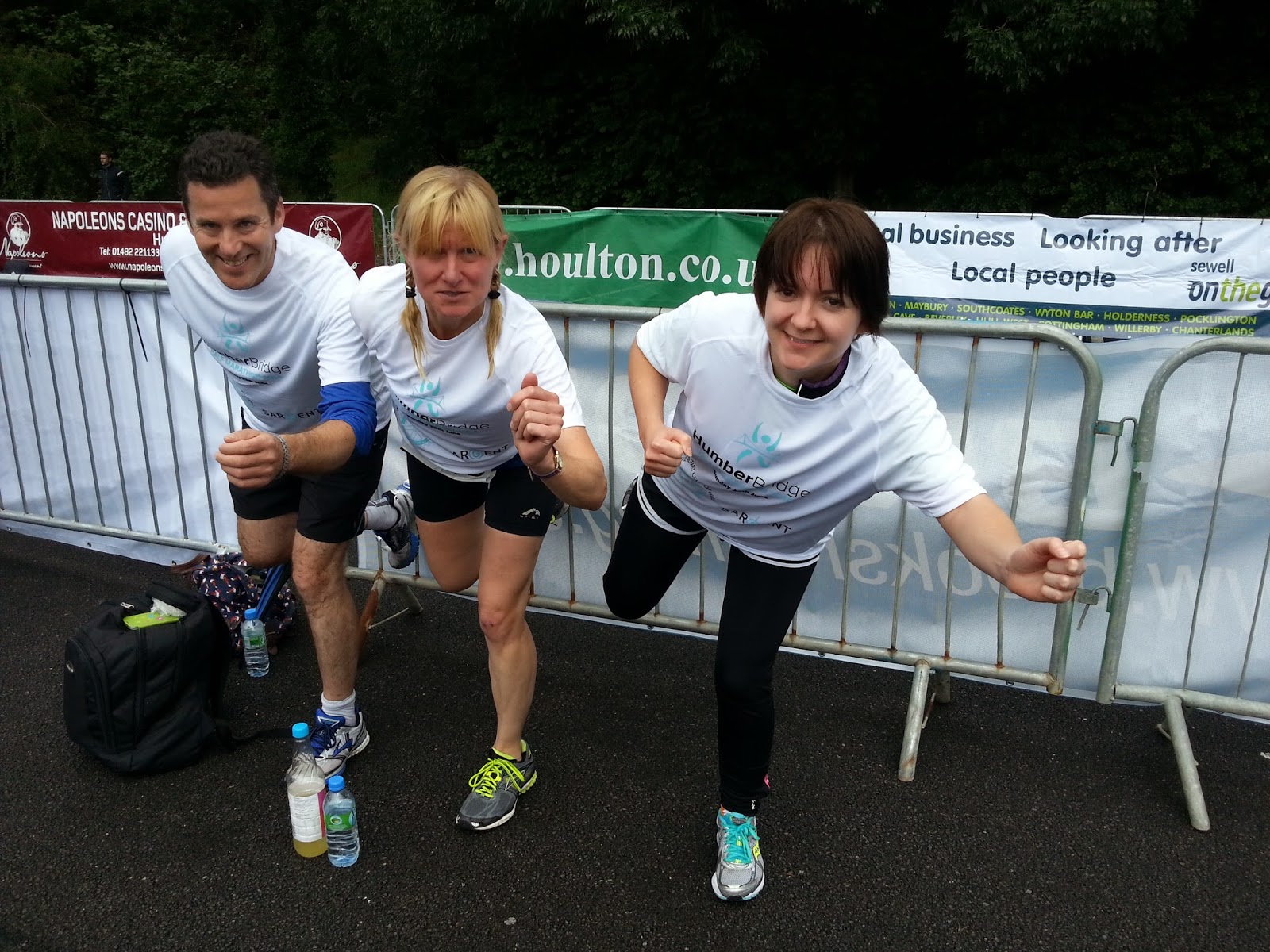 And it wouldn't be a blog without a spread sheet or two:

My next half marathon is the Isle of Axholme Half on 28th September, but as this is only a week before my next Marathon (Chester, 5th October), I need to forget all about times and PBs and just run it for fun.  Chris has entered this one and it will be his first half marathon, so we intend to run it together.  Hopefully, I can help keep Chris motivated and he can help keep my mind off times!  That’s the plan, anyway!