As usual, it is the eve of my next half marathon and I am only just writing about the last one
This was the half marathon that I nearly didn’t run.  I left it too late and when I went on line to enter, it was full and entry was closed.  My running buddy Sue, unbeknown to me had entered and was planning to surprise me on the day by turning up at the start-line.  When I told her I hadn't got a place, she contacted the organisers and transferred her number to me.  I was so grateful as I wanted to have a crack at sub 2 hours.  Sue insisted that there was nothing altruistic about her deed; she would be only a week back from Australia, still possibly jet-lagged, so was pleased to opt out.  She still volunteered to marshal!

I was slightly nervous in the day and couldn’t quite place why this should be so.  When I did the Blackpool Marathon, I could understand being nervous as a full marathon was an unknown quantity.  But I know I can run a half, so why be nervous?  Sue came up with a probable answer.  For one thing, it was only a month after I’d run a marathon and I’d been recovering from that, not done any long runs and my training plan hadn’t been up to my usual military precision standard!  For another thing, this was a re-run and not only did I want to beat my time from last year (2:23:36) but I wanted to do it sub 2 hours, which seemed a big deal.  Not surprisingly, once I realised why I was twitchy, I settled down. 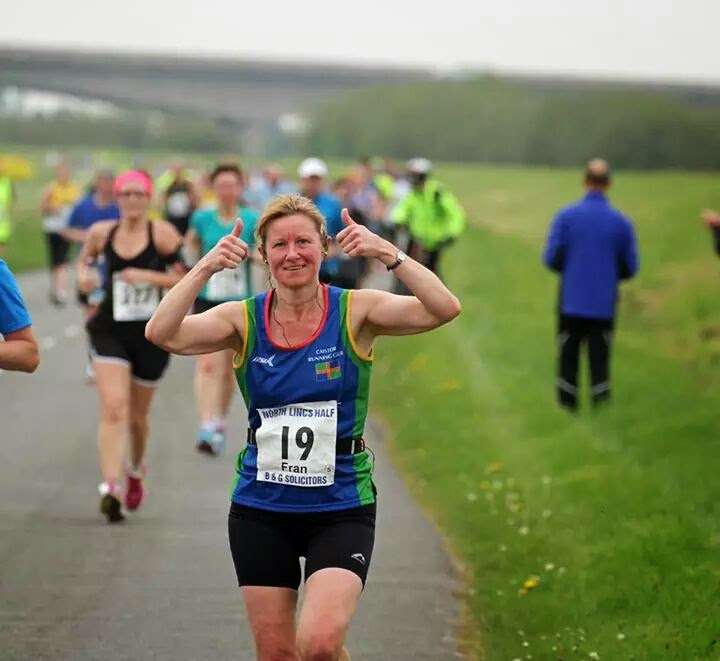 It was a lovely enjoyable run.  I remembered to take it steady for the first mile and then listened to my gadget (I’m using the MapMyRun app) for my average pace after 2 miles.  I was slightly over the 9:09 minute miles that I would need to finish in under 2 hours, but I wasn’t worried as I know I could go a bit quicker once I warmed up.  I settled down into a nice plod, music playing loud in my ears so that I wouldn’t be able to hear how breathless I was, and took in the scenery. I also posed every time I saw a camera!

There was (as last year) a clock at the halfway point, which is very encouraging. At that point my time was 56 minutes, so I knew that even if I tired a bit and had to slow down slightly, I would still come in under 2 hours.  They were giving jelly babies out at that point too, so I grabbed 2 handfuls and got them down me.  I was using gels too – this was the first time I’d used gels in a half marathon.  I don’t particularly like them, but I practised using them when I was training for Blackpool and I found them so good in providing a bit more fuel that I decided to take a couple with me for the half.  I find that they give a boost and although it is fairly short lived, I seemed to catch and pass people in the minutes soon after taking a gel.

There were about 10 or 12 Caistor Running Club members doing the race, but I hardly saw them once we got doing as our paces are all so different, most of them quicker than me!  I did catch up with one, about 4 or 5 miles from the end and stayed with him for a couple of miles, but then he got a spurt on and finished about 5 minutes ahead of me – an amazing amount of time to gain in the last couple of miles.

I know that Sue’s marshal point was going to be somewhere along the home straight (about 3 miles of straight road), so I was slightly put out when I was about a mile from the finish and hadn’t seen her.  I figured there must have been a change of plan.  And then, just as I turned to go up onto the bridge over the motorway, I could hear her easily recognisable voice shouting encouragement to runners ahead of me.  When she saw me, smiles all round as she shouted, “come on Caistor”, then, “Frannaaaaaaaaaaaaaa.”  A quick high five and I shouted that I thought I was on for sub 2 hours.
It was then just about half or ¾ of a mile to go to the finish – into the Glanford Park Stadium (Scunthorpe United’s football ground).  I love this finish – a half lap round the outside of the football pitch, then down the middle to the finish line.  I managed to speed up slightly as I entered the ground, then really put a wiggle on to pass 3 people just before the finish.  And I did it.  1 hour,57 minutes, 17 seconds!  I couldn't have been more proud.

This was my second half of the year and in both, I beat my previous time.  That’s good enough, but cracking the 2 hour mark felt fantastic.

So, what’s next?  The Humber Bridge half.  My goal for that one?  Well, a very experienced runner at the club has suggested we should always have 3 times in mind.  One – the time we think we can do, Two – the time we’d like to do.  Three – a ‘dream’ time.  So here we go:

Getting a sub 2 hours, let alone a personal best on a course as challenging as the Humber Bridge Half, is a tall order.  Seriously as long as I beat last year’s time, I’ll be happy.  But it’s nice to have those other two goals in mind too.
Posted by Fran at Saturday, June 28, 2014