The Making of the Willy Wonka Scarecrow - In Just Seven Days, I could Make You a Maaa-aaa-aa-aa-aaan!

During the lockdown due to Covid-19, I heard about the Keelby Scarecrow Festival.  I was delighted!  I've seen scarecrows every year but never heard about it in advance. I didn't realise that it was another one of Shell Soar's community projects!

I wasn't sure what theme to go for.  I thought of doing a Doctor / Nurse / Paramedic because of the Covid-19 pandemic, but Vicky thought everyone would be doing that. We'd just Painted our fence purple and as it looked like the colour of a Cadbury's Dairy Milk wrapper, Ollie suggested I go for a chocolate factory theme and make Willy Wonka.

A few people have asked how I went about it, so I thought I'd tell the story in pictures. So here we go. 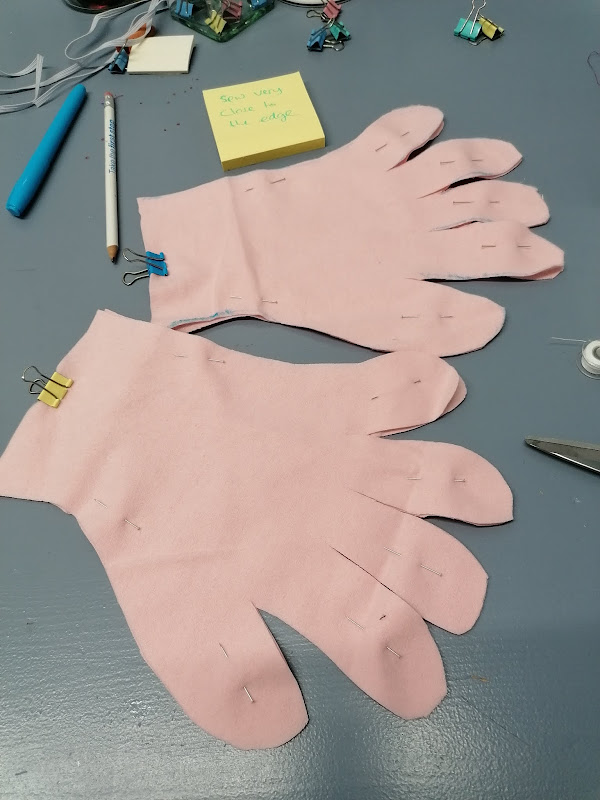 I started with the hands, cut out from an old pink sheet. 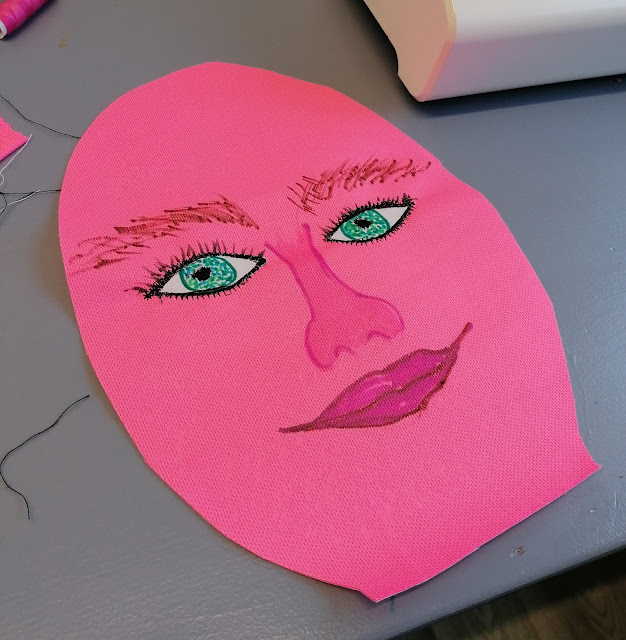 I tried to draw the face, and stitch the outline, but it looked more like a woman.  So this ended up being the back of the head! 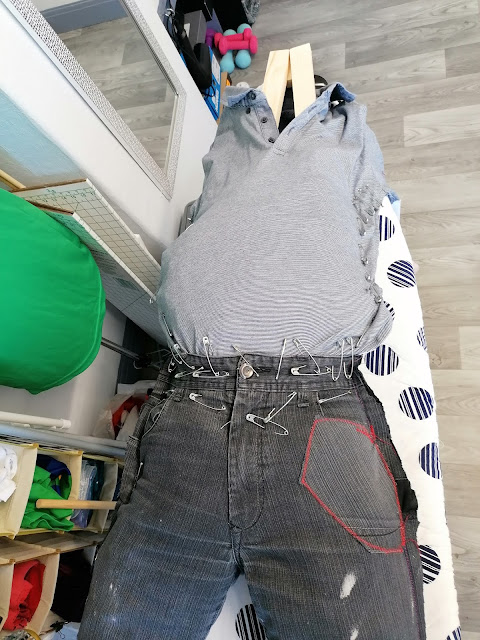 Chris made an A-frame so that it would be sturdy, and I dressed it in an old T-shrt and jeans. I used loads of safety pins to hold the body together. 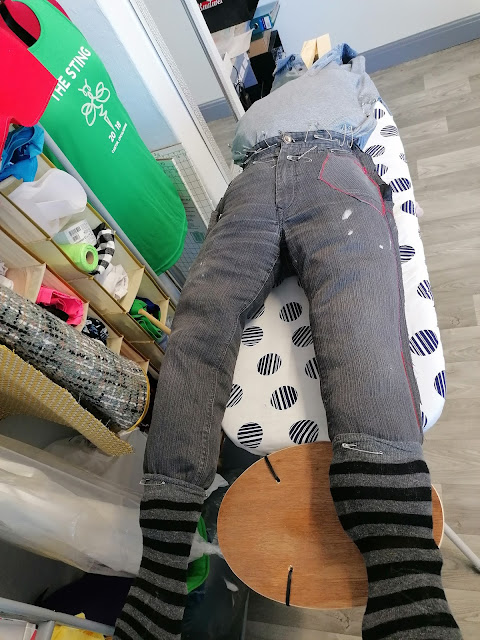 A pair of socks went on the end of the old jeans and everything was stuffed with scraps of fabric. 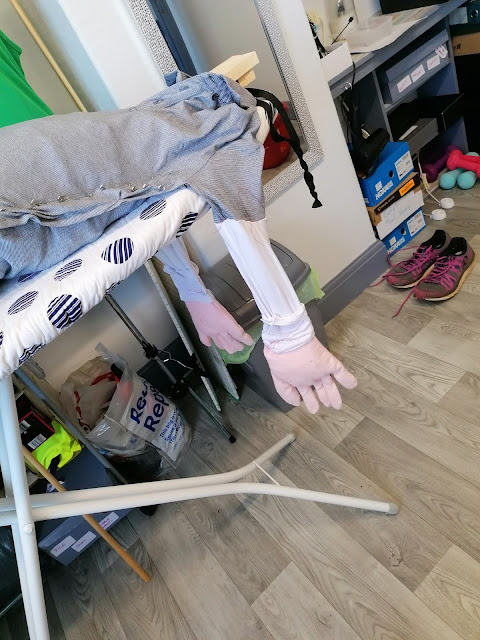 The arms were a bit limp so I stuffed them with some wire, wrapped in scraps of fabric so that they could be posed like a bendy toy. The wood frame stuck out of the bottom of the feet. 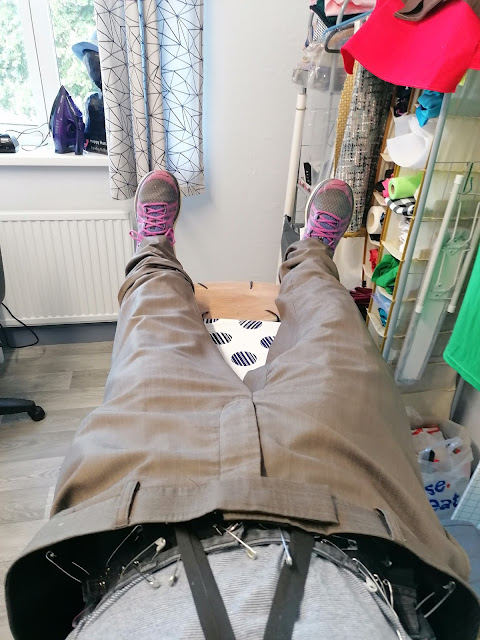 Then I added an old pair of trainers - helped by Chris, who cut a hole in the bottom of them. 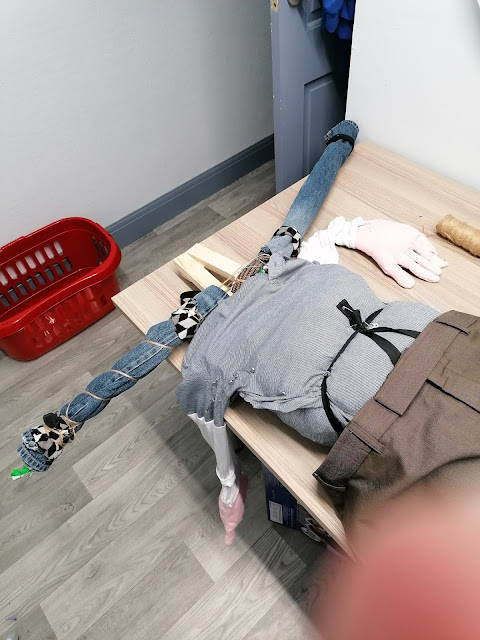 Wire and old jeans made the arms a bit stiffer.

Add a T-shirt and add more stuffing.  Add our Ian's trousers that he was sending to the charity shop. 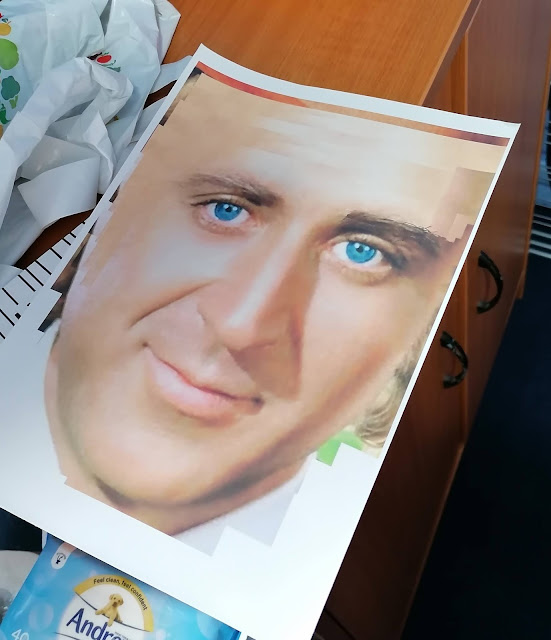 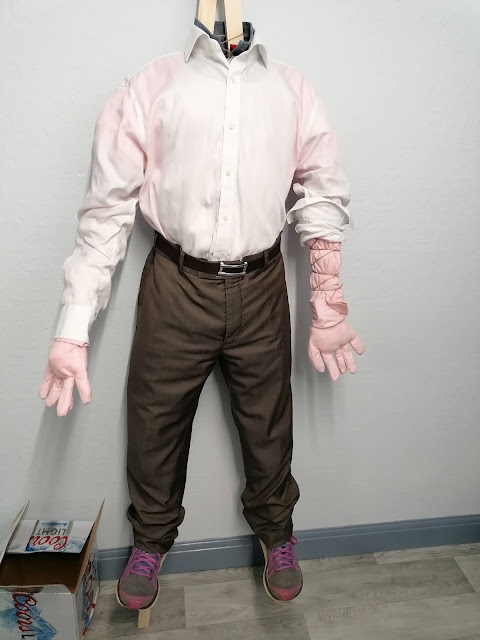 Add one of our Ian's old shirts. 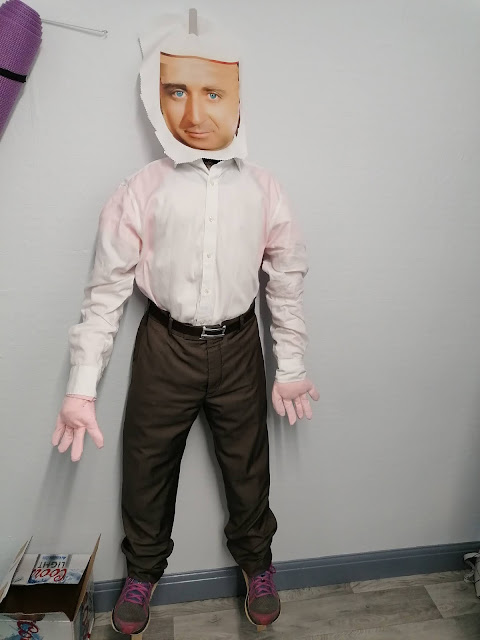 Try on the face! 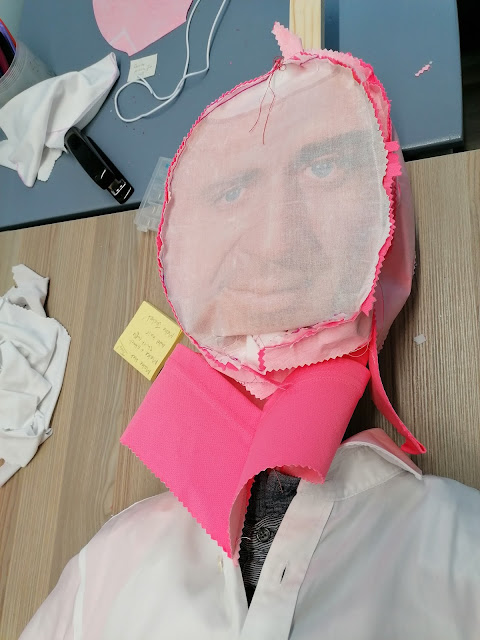 Work out how to fix on the head. 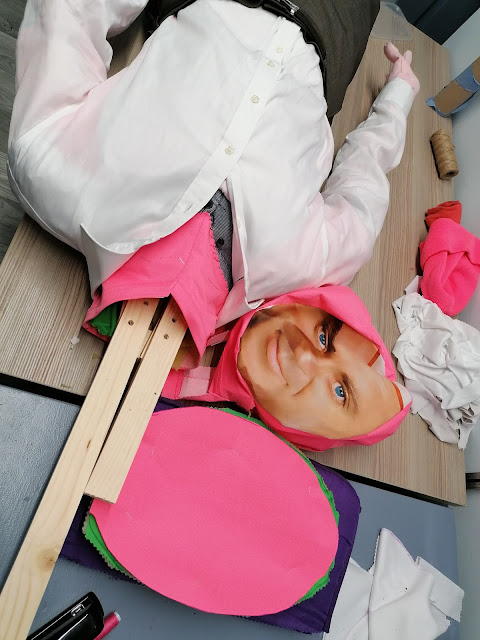 Starting to assemble the head / face over the top of the frame. 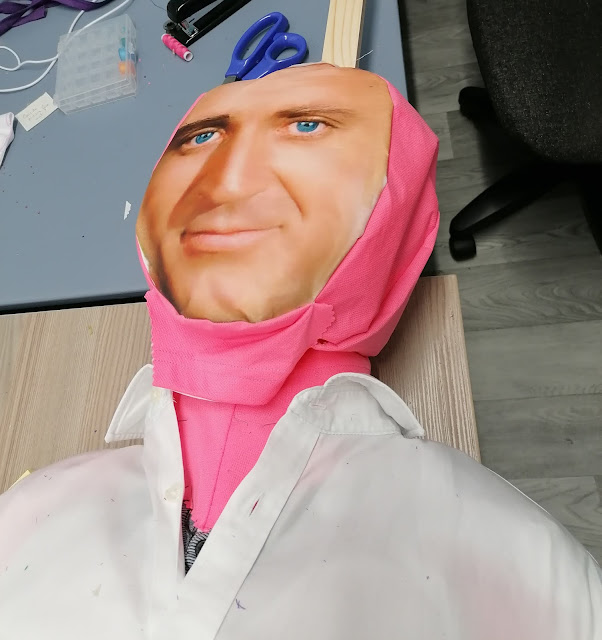 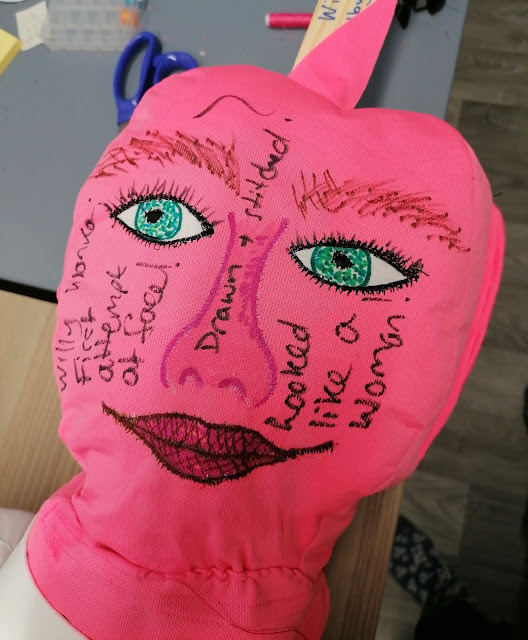 Deface my first face attempt and use it for the back of the head! 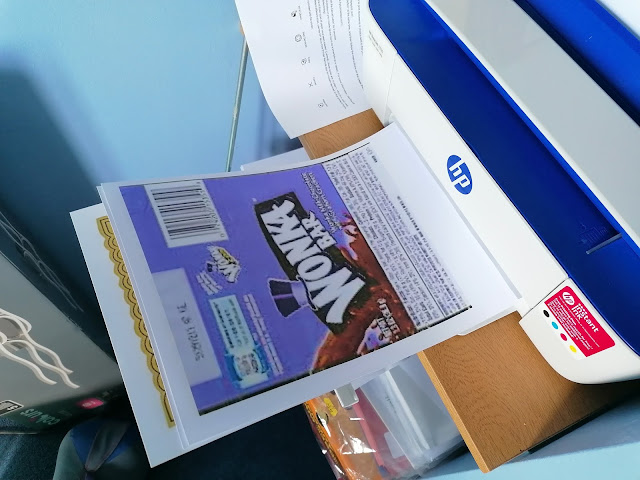 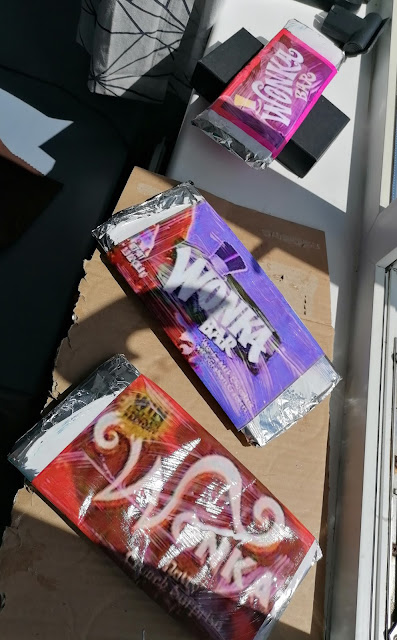 Make Wonka bars by printing out labels, wrapping round cardboard and tin foil and then seal with PVA. 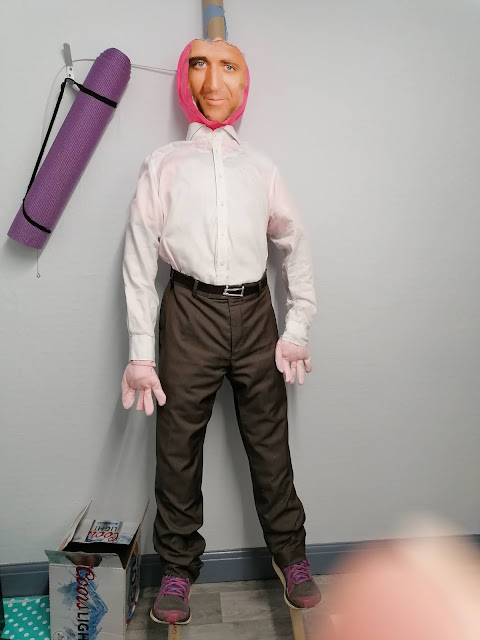 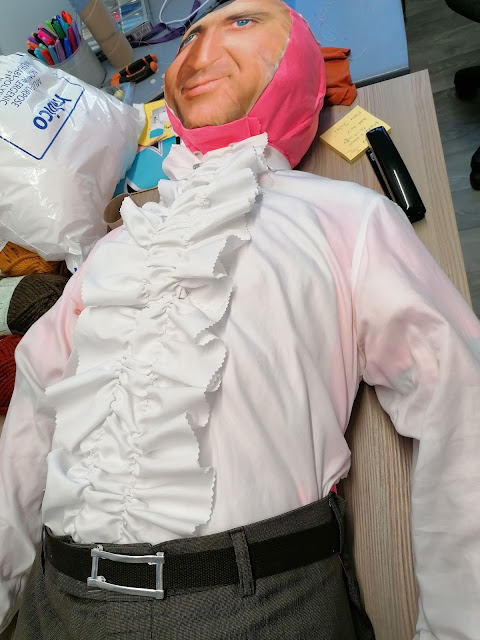 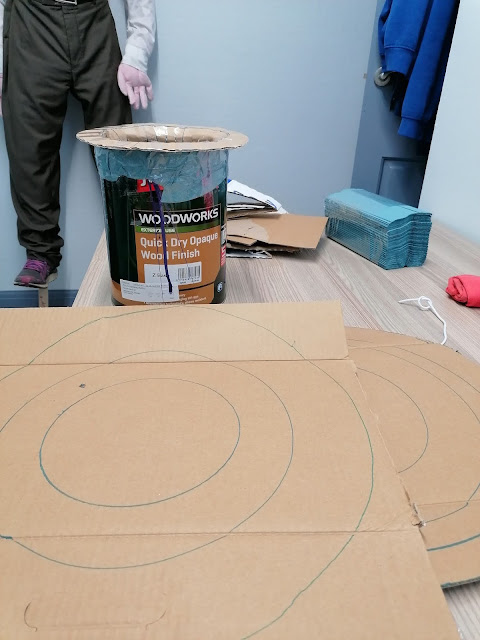 The hat started out as a paint can. 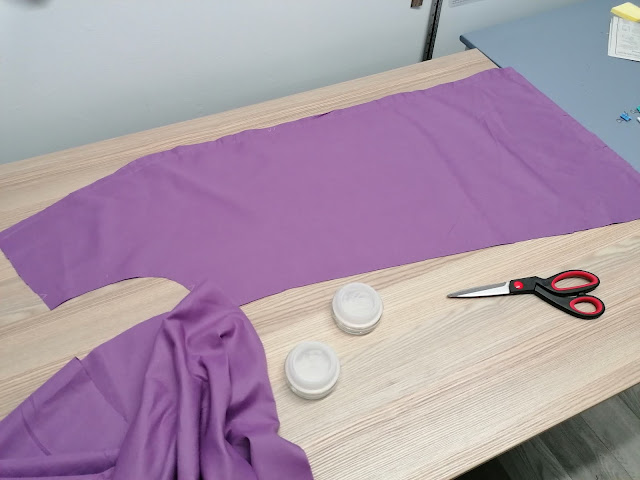 Cut the jacket out - this was an old sheet and I used the pattern for a duster coat. 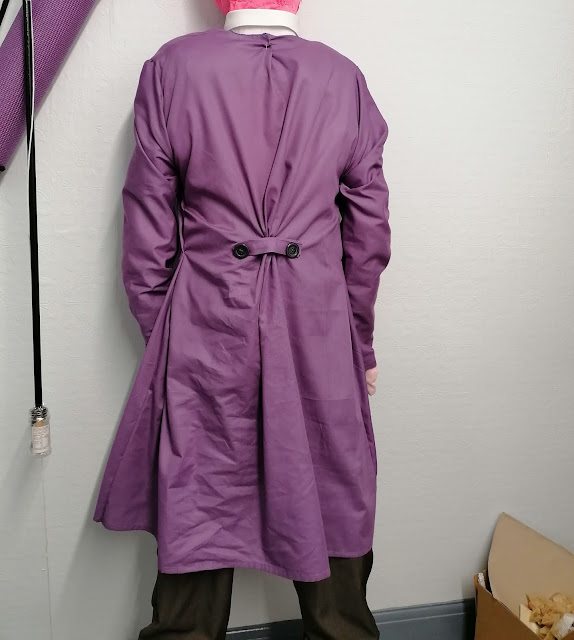 I put a bit of work into gathering the back and adding the buttons, but it didn't show when we put it up on the fence! To the left, you see the cane in the making. A bit of dowel, painted black, with a herb pot stuck on the top. I covered the herb pot with tinfoil later. 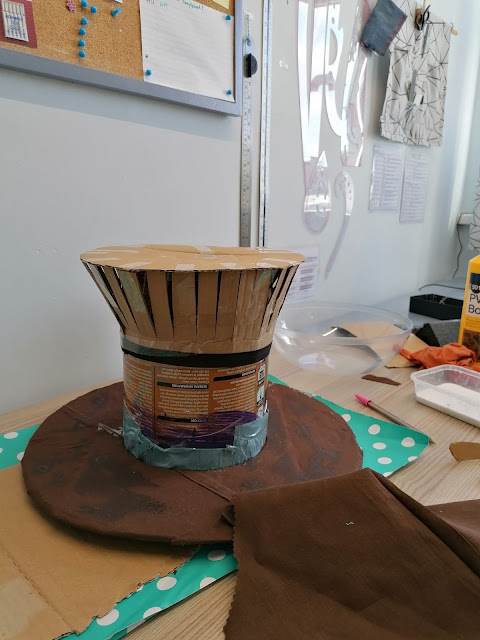 Cardboard and PVA glue to shape the hat.  Cover with brown cloth. I used cheap brown pillow-slips from ebay.

I used various colours of wool for the hair. 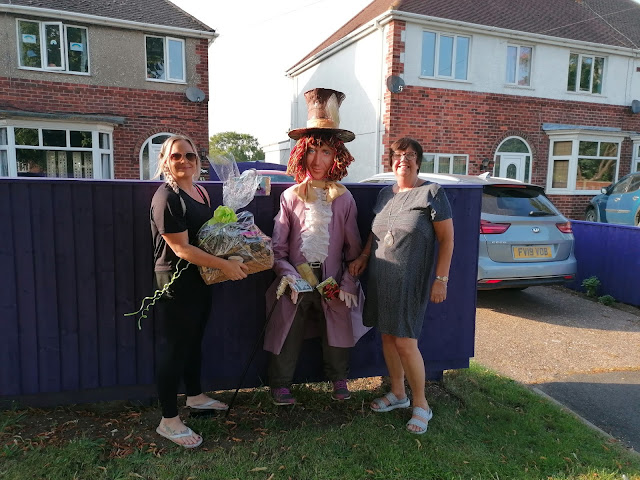 Shell and Amanda (Morrison's Community Champion) showing Willy the Hamper that was my prize for creating him!  Awesome prize - I didn't even realise there was a prize. I was just in it for the glory! Once the judging had happened, Chris said, "right, can we take it down now then?".  He's ace....... he indulges me when I get these ideas into my head, but worries that people might get the idea that we are eccentric or something.  As if!  Then again, the post lady told us that people had been talking about the effort we had put in, and said we'd really gone the extra mile painting the fence to match!!  Ha ha ha.  The fence painting came first. Honest! 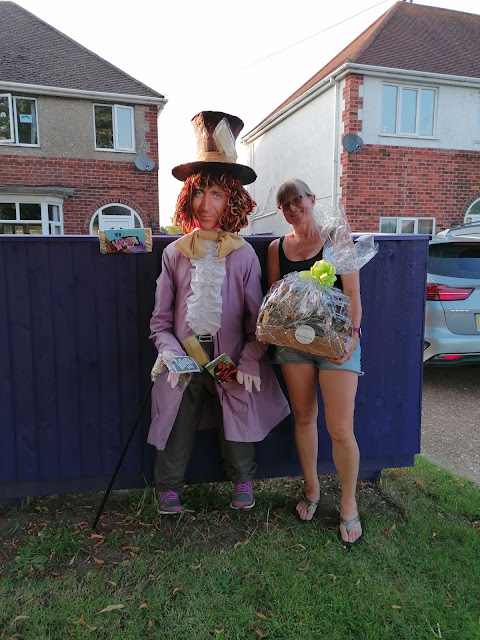 A few days later, the subject for the CRC virtual quiz was The Rocky Horror Picture Show - set by Dame Kath and John Young.  When we saw the film and heard the song, "In Just Seven Days, I Could Make You a Man", I kept thinking about me making Willy Wonka!  I must admit though, he took a little longer than 7 days.
I loved making the scarecrow, but the best thing was that I'm currently working from home, from an upstairs front room.  Every day, I was delighted by seeing people looking at Willy and kids of all ages having photos taken with him  How lovely to bring fun and joy to so  many.  People were even putting babies / toddlers in their pushchairs next to him and taking pics.  I really enjoyed this.
Finally, when the Scarecrow Festival was over, I didn't like to dismantle Willy, so I posted in the Keelby group to see whether anyone with an allotment would like him. So he has found a new home just down the road.
I enjoyed this project so much.  What's next?  Well, it's not that long until Hallowe'en.  I have many ideas in my head............erm...... I just haven't told Chris about them yet!