I’ve not really dared to write much about Dukeries Training for fear I would jinx things.  Sarah had to pull out of a few races due to injury but – touch wood – this is provisionally on the mend.  I say provisionally, because all seems well as long as she stays off-road.  Running on the road seems to cause problems.  It turns out that Sarah, like me has flat feet and that her injury, like mine is the posterior tibialis tendon, although the site of her pain is higher up the leg than mine.  So when she speaks of the pain, I can completely relate to it – at its worst, it’s difficult to even put any weight on it walking very carefully, let alone run!
So with Sarah improving, I feel I dare add a little more about this journey.  I’m not going to get up to date in one post, but let’s have one training run, one ‘meet and greet’ and one race.
Dukeries Recce – 10 mile run.
On 9th January 2016, a group of us headed over to Walesby in Nottinghamshire, to run a 10

mile section that Mike had mapped out from the middle of the 30 mile route.  I found this very challenging and for the first 2 miles, I was wondering whether I’d bitten off more than I could chew with all this ultra malarkey!  However, despite being hard, it was enjoyable and the miles flew by in good company. We covered the ‘worst’ hills and Mike reassured us that we’d all be fine on the day and that the elevation was nothing to worry about.  I got very muddy. 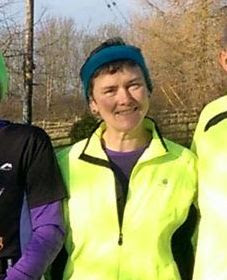 I first met Emma late summer 2015 when she joined CRC for her first run, which happened to be from my house. At the time, she had been mainly running 5k distance, but took the 5 miles that evening in her stride.  Here’s what Emma said when I asked her about running in general and Dukeries in particular.

Hi Fran! I don't mind answering your questions at all. I'm 51,  fast approaching 52 and started running around March last year. Last January I decided to make an effort to lose some weight. I have never been small, but since getting married and having children steadily gained weight. My niece was getting married in Feb and I had bought a dress to wear which was tight!!  I was determined to look good in that dress, not my usual choice. I managed to do it, and I lost 3 stones in all.

The best thing about losing the weight was that my knees no longer gave me the trouble they used to. At some points in the last few years I had hardly been able to have a decent dog walk let alone run. It was depressing. Anyway, as part of my weight loss regime I was fast walking, which eventually progressed into running a little. It progressed from there. A friend of mine was running a little and encouraged me to run with her. She had tried park run a few times. I had a go. We did a couple of runs for life last summer. While I was on holiday last August I wanted to go for a few runs, and did. I started running with Caistor Running Club in September and haven't looked back. As you know, I'd only run 5K when I started with CRC. Running with others gave me confidence to run further and the encouragement was amazing. It was Kate Bartlett who asked if I'd partner her in the gruesome twosome. She said she knew I could do it, so I entered. That is so far the furthest I have run. I have always been a keen walker and in my 20's was into long distance walking, so I know I can walk long distances, so I'm kidding myself that running 30 miles will be easier than walking it!

I'm not sure I have a favourite race distance yet, as I've only done one 10k and one half plus more 5ks. I do know I prefer trail or off-road. I have a love of paths and maps, and love to know where I've been and how far.  Once again it was Kate who got me involved, and Sarah gave me the confidence to join the group as she said I was as capable as anyone to have a go. So, you all gave me confidence! I am looking forward to the training and companionship along the way. I just hope my knees last out!

TheRauceby Ripper.
This was my first ever off road race.  It was muddy to the point of my shoes nearly being pulled off. Sarah couldn’t run due to her injury and Kate Bartlett ran instead.  I don’t know what was the matter with me, but my head just wasn’t in the right place.  Maybe I’m so used to running with Sarah on these off road affairs that I just started on the wrong foot in the absence of my ‘comfort blanket’.  At 3 miles in, the only thought in my head was the thought of it finishing!

Kate Bartlett was a great support and kept me going the whole way round, telling me I was doing fantastic and encouraging me along.  She could certainly have gone quicker without me. It is just the height of unfairness then, that as we returned to the road for the final mile, she coggled over on her (already bad) ankle down a divot in the road, hidden by a puddle.  Bloody knees and painful ankle.  She said afterwards that she was glad she was with me and not with someone of a more delicate nature – she didn’t need to mind her language!  I felt awful for her, but also admired her bravery.  She was soon up and walking and then to my surprise wanted to steadily trot the rest of the way.  Hats off Kate – I would have just had to have a bit of a cry!    I felt that I endured this one, rather than enjoyed it.  Without Kate's encouragement, I'd have been walking from about 3 miles.

It was not a good day for Mike either as he also hurt his ankle seriously enough to cause him to pull out of a race the following day.  On the plus side, new CRC member, Cathie won her age category - and acquired a lovely piece of bling. 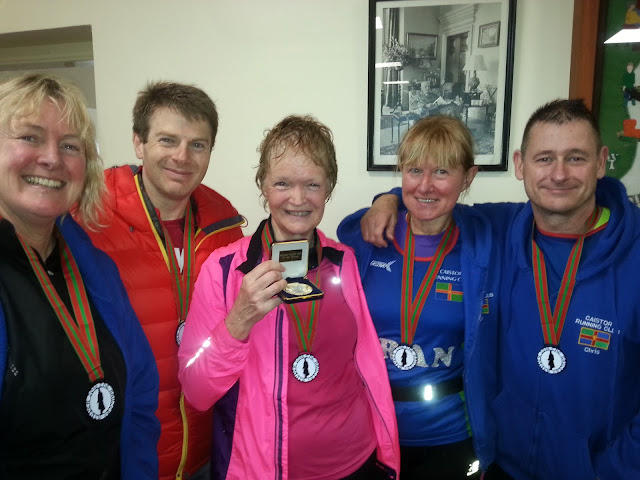 Onward and Upward.
We’ve done some more training since then and a couple of races.  Time is moving on but I don’t feel phased about it.  This worries me a bit.  For someone who has tended to avoid all but the shortest off-road runs, 30 miles is a big deal.  But I think it’s the fact that I’ll have the company and support of good friends and the fact that there is no time goal, that is helping me to stay relaxed about it.

More soon, including Sarah’s return to the fray and the latest on Cheryl’s HM training. 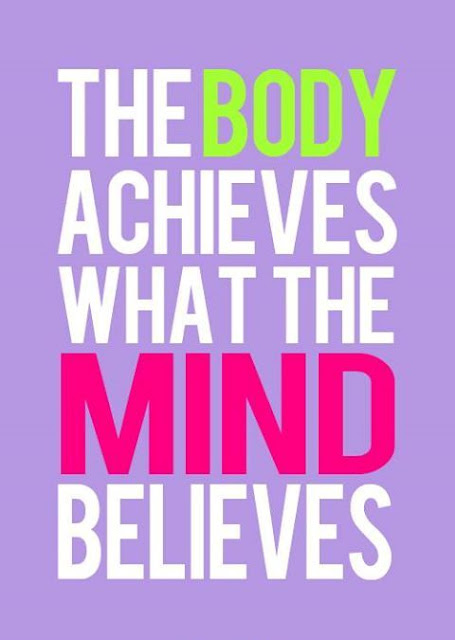