Not to be confused with the less famous Ike and Tina Turner
(I bet they never get tired of people saying that!)

I started my introduction to off-road running and mud with Sarah at Willingham Woods in Market Rasen in November last year. We did a couple of 5 milers, then a 7 miler and CRC run just before Christmas - with cake and mince pies to follow. In fact, most of our runs have been followed by cake!  It's a CRC trademark really!

These runs got me gently into the feel off running off road and I started to appreciate the advantages.  No traffic noise or fumes. Lovely scenery.  I also learned that I can take the pressure off myself to run at any decent pace, because I have to concentrate more on where I put my feet.  I've learned to trust my shoes - I can now allow myself to be a bit more relaxed and let my feet slide a little bit because then the shoes will grip and stop me.  I've learned to just run through muddy puddles instead of trying to jump over them or go round them - it's quicker and safer, and actually the puddles wash some of the mud off the shoes! 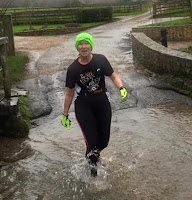 Our first 'official' Dukeries training run was on 3rd January 2016 and was Frankie's appropriately titled Tealby Torturer - a 10 mile route, starting with uphill on the road, the rest mostly over fields and tracks, finishing with a wade through an actual RIVER..... well, trot through a ford if I'm honest.

Just to prove that I ran through it, we have photographic evidence.  It was really pleasant to cool down after running the last mile a little quicker because a) it was on the road and b) Andrew had run back to pick up the back-marker (me!) and somehow this always makes me pick up the pace a bit.


Here are Frankie and Tina,  in the foreground, coming through the ford, With Chris R to the left, Chris and Jayne to the right.  It would be fair to say that this photo gives a fair representation of Frankie's antics and Tina's tolerance!!!  I'm sure he wasn't having a crafty grope ... surely he was just making sure his beloved didn't slip in the ford!


Here's what Tina and Frankie had to say when I asked them about their running so far and and their decision to enter a 30 mile ultra.

I'm 57 .... 58 in May and I started running the year I turned 50 -  so I've been running for about 8 years.  I don't really think I have a favourite distance but after a lay-off last year due to an injury, my chiropractor said I was better to keep to 10 k and that triathlons were better for me than just running.  So that was my plan!

Then somebody posted the ultra on face book, Mike most likely and I got swept along by Frankie. Having done a marathon (Chester in 2014),  I have some idea what's involved, and I know that you're not expected to have to run the full distance of an ultra.  I think there's more pressure with a marathon.  I'm hoping that this,while it will be hard will be a little more of a relaxed affair and it doesn't cost as much.  I just hope to be able to keep sound (uninjured). I will be doing lots of swimming and cycling in between as I find running 3 times a week is enough for my body.

Here's my story,it's sad but true, it's about a girl that I once knew, she messed about and ran it around *  - oops sorry I don't think you need this bit,- it's the ultra marathon bit you want isn't it?

Well I'd done 14 marathons,11 road ones and 3 off road,(Swaledale off road marathon X 3). I'd never thought about doing an ultra.  I've seen Mike put on Facebook about all his exploits loads of times and thought well done him, but wasn't too bothered personally.  Last year (2015) Tina and I did the Dukeries 10 miler and I think this was the catalyst for the ultra.  We both enjoyed this race and I've never forgotten my first taste of sausage plait I had at the end.  So when Mike put on Facebook this year about ultra saying 'come on Frank, come on Tina, I said to Tina,  "what do you think?  I wouldn't mind" and she turned round at me and thumped me! No,only joking, she really said,  "lets do it!"*  So we're doing it. Doing this race would be a great progression for us both.

(* - one has to wonder whether Frankie was still using poetic licence in reporting Tina's response.  He does have the habit of entering her in races and letting her know afterwards [not that I'm suggesting that's the case with this one] and tells us that at the end of every race, she shouts, "Frankie, I LOVED it".  Tina tells us that she might say a lot of things as she comes over the finish line and this isn't one of them!)

Final words got to Tina, on Frankie

He's 56 at the weekend and he was running long before I met him  - it must be getting on for 30 years.  I think he would say half marathon is his favourite distance, and if I've got that wrong then he should have answered ALL your questions properly himself!

In my last post Sarah commented that she was pleased to be joined on the Ultra journey by me and 'the other girls'.  I hate to break it to anyone this may come as a shock to, but there is a rumour going around that Frankie is not a girl at all but is in fact A BLOKE! Well! I'll go to the top of our stairs!

Thanks Frank and Tina for your profile, the banter and the Tealby Torturer. I'm looking forward to future training runs and to the Ultra itself.