Here’s one for the Ladies – Let’s talk about knickers!

I wrote this post a couple of weeks ago and have debated with myself whether or not to publish it.  I’d almost binned it off, but then my good friend Jayney-Jazzle McConnochie announced toward the end of a run last week, “I'm going to have to get some sort if implement to try and retrieve my knickers from my bum cos they've gone so far up...I've got the wrong knickers on.”  I knew then that for the sake of Jayne and for female runners everywhere who are quietly suffering, it was right to go ahead and share......

Just get the basics.

It’s common knowledge that the most important piece of kit for runners, whether male or female, is a pair of correctly fitting shoes.  It is also accepted that for ladies, a good supportive sports bra is essential, both for the comfort of the runner and for reducing the risk of traumatisation for the spectators.  Other than that, it doesn’t matter what you wear to initially start our glorious hobby.  Once you are running more often, it’s advisable to wear light weight tops and bottoms in material variously referred to as technical or wicking.  Basically it allows sweat to evaporate, unlike a common or garden cotton T-shirt, which will hold the sweat and cling to you

The problem we don’t talk about.

No one talks about knickers do they?  Let’s rectify that right here, right now.  If we need a sports bra (and we definitely do) to hold our boobs still, doesn’t it follow that we need a decent pair of supportive knickers to hold our bums a bit stiller.  Bums, like boobs are made of fat, which wobbles.  It just does, even in slim runners.  I find it as uncomfortable as bouncing boobs!  So much for how it feels - what about the look?  Not so much from behind, but from the front.  It’s not so bad if you feel comfortable running in a skirt or loose fitting shorts.  Like many people, I just don’t get on with any garment that is flapping around very much.  So, that leaves us with (variously called) leggings, tights, capri pants and other figure-hugging apparel of varying lengths.  A little too figure-hugging for my liking.  Let’s face it – no one wants to see the camel’s toe.  There. I’ve said it.

The ‘research’!
So, I set about on a bit of research.  Qualitative research, not quantitative. N=1.  Oh alright then, it’s not proper research as we know it. No. OK.  It’s just my opinion!

I wanted to find the perfect pair of knickers for running in.  They needed to be of a fabric that’s firm enough to hold things still but not so firm as to restrict movement or post-run food intake!  So, just say ‘no’ to Spanx!   They also needed a good robust gusset, that’s plenty wide enough.  I know this doesn’t sound very glamorous, but some modern knickers have a gusset barely wider than a thong!  And flimsy fabric! Don’t even get me started!

I thought my perfect pants might be easy to find with the help Google.  Searches on ‘running pants’ just brought up leggings, tights etc.  Even running knickers didn’t bring much up, but I had more success, with loads of potential sites to look at when I searched ‘running underwear’.  This lead me to retailers where I found that many of the sports bra brands also do sports knickers.  I thought I’d hit the jackpot.  However, I was very disappointed.  Most of them were the skimpiest little things, low rise and designed only for those who can get away with skimpy shorts and crop tops and have a 6-pack to show off, rather than for those of us who just want a certain level of decency.  I did, I admit, find 2 pairs that looked as though they would fit the bill – they came up to the belly button at the front and were slightly shorts style, so that they wouldn’t cut in where the inner thigh meets ‘other parts’.  But one pair was priced at £29.95 and the other £34.99.  Yes – for one pair of pants! I did a double take! Surely it must be for a pack of 5 or part of a set of bra and knickers!  But no. One pair.  I could buy a whole new set of running clothes for that!

Although I abandoned my (re)search for a while, this story does have a happy ending.  Earlier this year, while shopping for a frock for the CRC Market Rasen Day at the races, I decided to buy new knickers to smooth me out a bit under the new outfit.  I headed for M & S.  Picked up a 2 pack, one black, one skin-tone for £9.50.  Well, would you believe it, although they were labelled up as Shaping and ‘light control’ they were really comfy that day.  That got me thinking, could I run in these?  Surely even ‘light control’ would be a bit restrictive for running?

I gave it a go and they are bloomin’ marvellous.  Who knew?  Good old fashioned M & S! I don’t know why I didn’t think of that in the first place. 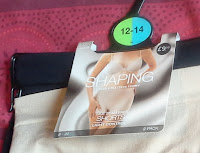 I’m not going to claim that my bum stays totally still when I run.  But if feels supported.  These pants come nicely up into the waist, rather than cutting either the belly or the buttocks in half, so you don’t get that ‘roll  of fat over the top’ look.  They are shorts design, so there’s nothing cutting into the groin.

And what about the camel’s toe?  OK, stepping right out of my comfort zone here, quick snap in the bedroom mirror.....