Round Two: The North Lincs Half Marathon

I had more time to prepare for the Scunthorpe Half Marathon and was able to learn from the mistake of rushing into it at Sleaford.  With Sleaford done, I had the experience of running in an actual race and had got the bug.  The goal of completing a half marathon before I was 50 was achieved.  I now wanted to beat my time.

By this point we (Sue and I) had started to take a more keen interest in how to train properly, and although we usually only ran twice a week, we were mixing it up a bit with longer steady runs and shorter faster runs.  We both went into this one having got 13 miles comfortably under our belts. 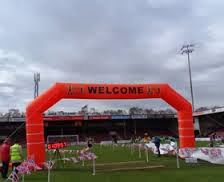 The venue for the N.E. Lincs half was really good.  Race HQ was the Glanford Park football ground at Scunthorpe, and the race finished with half a lap of the pitch and the finish line central on the pitch, giving a great view for our supporters and the feel of a real celebratory finish running down the centre of the pitch.

The race itself was nice and flat and the roads were closed to traffic, so it felt very safe.  On the day, the weather was pleasant – not too hot, but not freezing like Sleaford!

I was still struggling with niggles and aches in my right foot (from the cycling accident) and the knock on effect this had on my left knee and left hip.  I ran with my knee strapped up and took 2 paracetamol and 2 ibuprofen at the start, hoping that they would kick in at the point I started to hurt.  I started to feel sore at about about 8 miles.  Strangely, I found that if I could pick up the pace a little, the pain was less.  However, I couldn’t sustain the quicker pace for long enough because I was too breathless.  Sue had blister problems and had to stop twice to adjust her plasters; I had to keep jogging on the spot and up and down because if I stopped, I felt I would cease up! 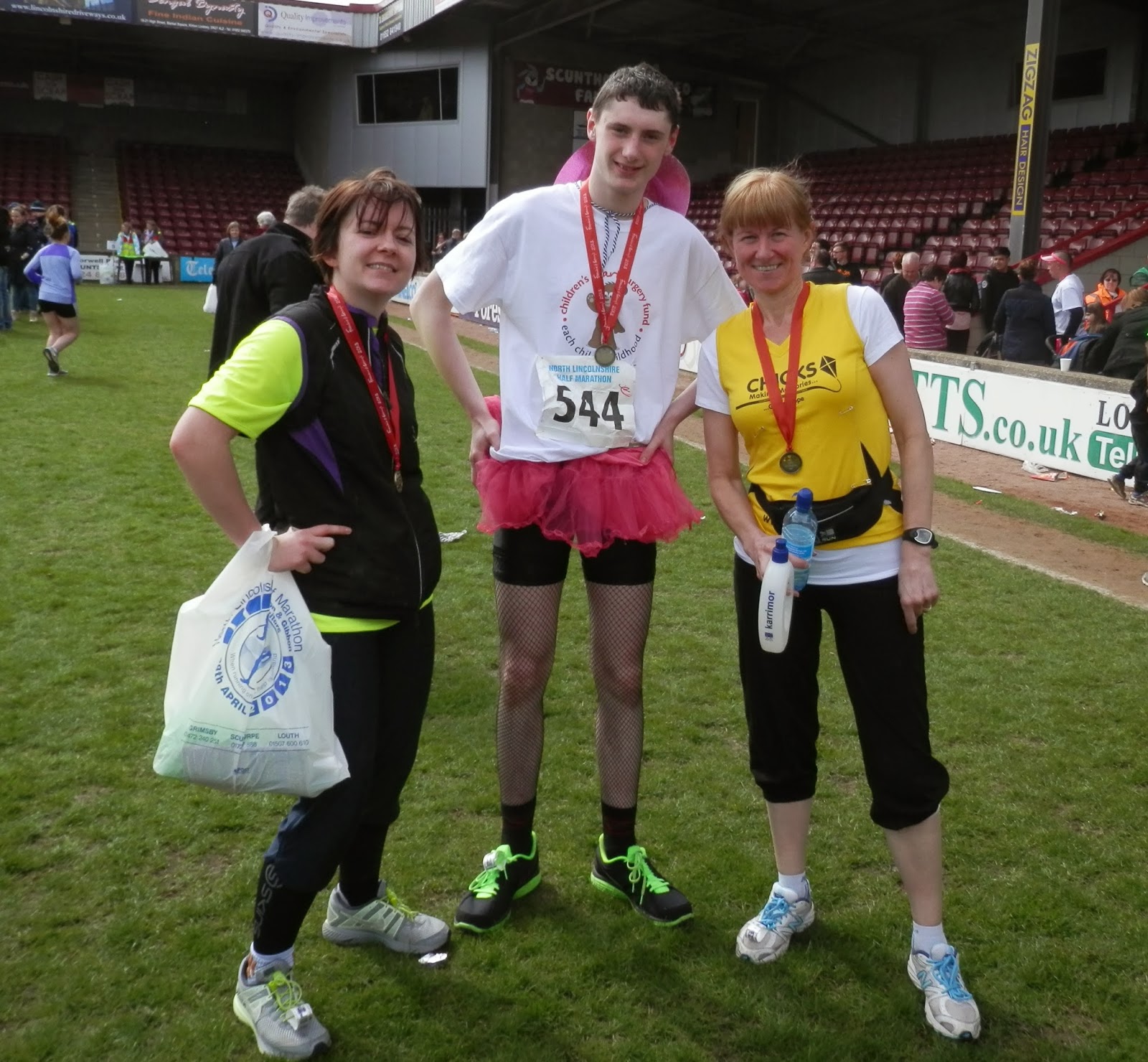 At just after the half way point, we picked up a man in a tutu, whom Sue named Bob.  He was struggling because it was his first half marathon and the furthest he had run before that was 4 miles!  Crazy dude.  That made our preparation for Sleaford seem almost sensible.  He ran with us for 2 or 3 miles and having someone else to chat to and encourage was a distraction from my pain and helped those miles pass by.  He then dropped off and had to walk for a bit.  He finished soon after us though and we grabbed him for a photo.

I felt very relaxed  most of the way round and I look back fondly at this event.  However, I was in quite a lot of pain in the left hip by the time I hit the 11 mile point and was desperate to get to the end.  There was a tiny stretch towards the end – perhaps only 100 meters - where we had to run on the grass verge to avoid a busy roundabout, and I remember saying “ouch ouch ouch ouch ouch ouch – I don’t like this”, and Sue saying “I know, not long now mate, we’re nearly there.” 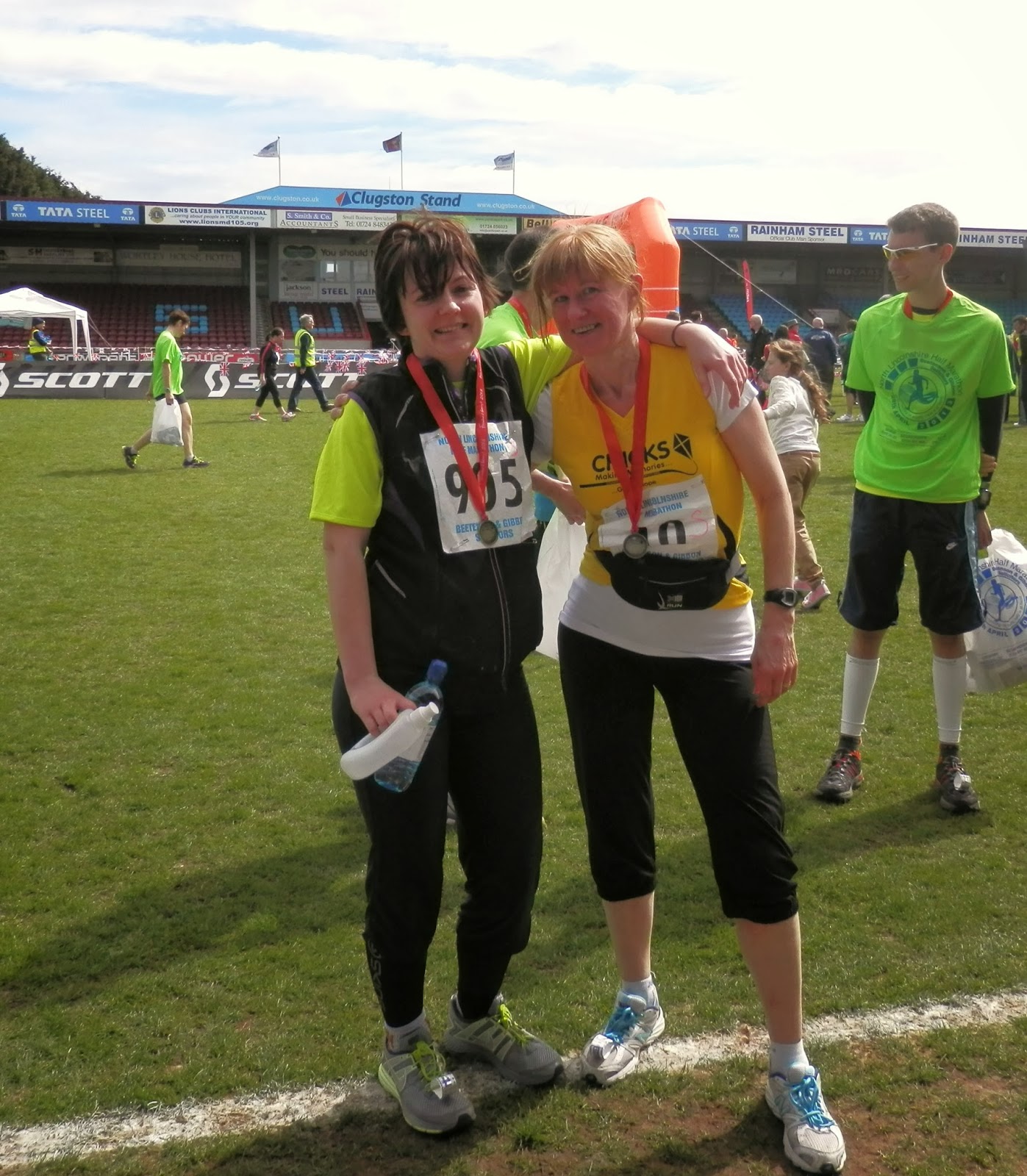 We saw the clock as we entered the football ground and knew at that point that we would beat our Sleaford time. I noticed that there were plenty of people coming in behind us, which felt like a real boost.  At Sleaford, I think there were only 3 or 4 people behind us.
Our names were called out over the P.A. system as we approached the finish line, another boost at the end and we finished in 2:23:36.  There was no fiddling about getting the chip-timer off as we had disposable chips.  What a good idea they are!  As it happened,  I didn't have 'runner's brain' at the end of this one - just aches and pains!  I recovered from them much more quickly than Sleaford though.
We didn’t get our picture taken at the finish on this occasion. Spectators were in the stands and not allowed on the pitch, so Chris and Vicky were too far away.  There was an official photographer, but he’d buggered off by the time we finished!  When we looked at the official photos later on, it looked like our mate Johny was the last finisher to be photographed over the finish line – he finished about 15 minutes before us.

We were given a Frankie & Benny's brownie along with our bottle of water at the finish and then had to walk to the other end of the pitch to pick up our goodie bags and T-shirts.  It was only then that I realised how bad the pain was in my hip.  I could barely walk; Sue finished that race in much better shape than me, despite her blisters.

The pain, just like the pain of childbirth, was soon forgotten.  Like planning another baby, it wasn’t long before I was planning my next half marathon – The Humber Bridge half. Well, it’s right on my doorstep – it would be rude not to.

Fancy giving it a go?

The 2014 North Lincs Half, will be held on 4th May 2014 - Click here to enter. Some of the sponsors are Meters to Miles,  McBride Physiotherapy, North Lindsey College, Scott Sports,  British Association of Road Runners and Frankie & Benny's. 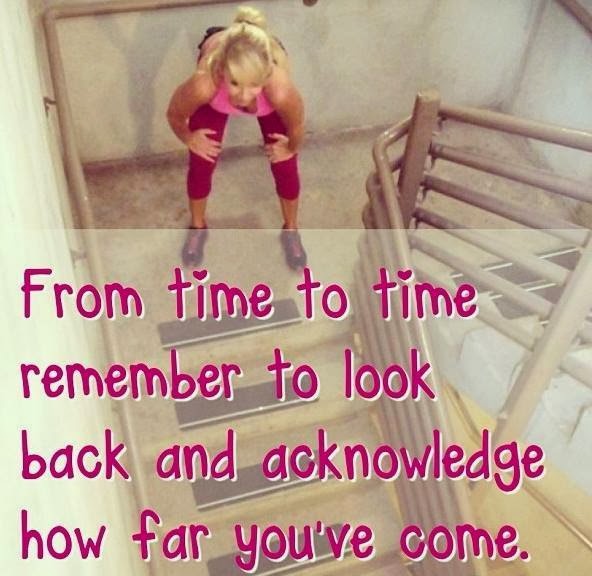