My first Half Marathon - Sleaford 2013

AKA – learning by your mistakes.

As I approach the Sleaford Half Marathon 2014, I reflect on the foolhardy way my running buddy and I approached the same race last year –our first half marathon.

As I recall, it was about mid-January and we were out on a 5 mile run in Grimsby when Sue said, “Jonny’s doing Sleaford Half Marathon on his birthday at the end of February. Do you fancy doing it?”  Given that the furthest we had ever run at that point was about 10k (6.2 miles), it was a pretty daft idea.  My answer was even dafter: “Yeah, go on then. Why not?”

There were plenty of reasons why not.  Jointly, I give you - we weren't fit; we were only running  once a week at that point; we hadn't run much distance; we had only about 6 weeks to increase  the length of our runs.  For myself, I was still getting pain from the broken foot episode, even on short runs and towards the end of a run would have knee and hip pain on the opposite side from trying to favour the other leg.

In other words, we entered the thing on a whim, just because another mate was doing it. I don’t recommend it as a plan, but we increased our distance (too) rapidly and by the time race day arrived, Sue had reached 10 miles and I’d managed nearly 13 (in about 3 hours!).

On the day, it was freezing cold. There was a smattering of snow on the ground in places and the frost didn't really thaw throughout.  There were even a few odd flakes of snow in the air.  Chris was our chauffeur and supporter, and even he got a raw deal. The RAF Cranwell race HQ where he was waiting for us was a huge building, unheated, and he was half frozen to death by the time we finished!

Our goal and the technology to help us get there!

We knew that there was a maximum time of 3 hours for finishing- any longer than that, and the poor marshals would have died of hypothermia!  We weren’t using any gadgetry at the time and our main aim was to finish alive and to run all the way round.  However, we agreed to try to do it in within 2 hours 45 mins, which would require us to sustain a pace of 12:35 minute miles.  Let me introduce you to – THE ARMIN!  No. That’s not a misprint for Garmin.  We couldn’t afford (AKA, we’re too tight to buy) one of those.  So I worked out what our time elapsed should be at each mile marker, putting in a one minute contingency to keep us on our toes, and wrote it on my arm to refer to as we went along.  It worked really well until the last 3 miles, by which point I’d sweated so much that the ink ran!

At the one mile marker, we were way too fast as we had run it in 10:35 (unsustainable for us at that point).  I told Sue we needed to slow down, but she said something like, “it’s OK. If we feel ok, keep on.”  By the second mile marker we were still too fast and still very cold.  We were horrified to turn onto a rough farm track that was also an incline.  Neither of us fare well off-road so a general ‘pissed off’ feeling set in for me.  However, I remained up-beat and held on to the excitement and almost disbelief that, “here I am, running a half marathon.”    It was a far cry from those discussions in the pub about the possibility of running this kind of distance.

Sue had said to me before the race to go on ahead if I wanted as she had it in her head that I could go faster. In reality, Sue can actually run faster over shorter distances; I fare better over longer distances.  Regards, Sleaford, I think her exact words were something like, “don’t wait for me or I’ll feel really patronised and tell you to fuck off!”.  Only good mates can talk to each other like that.  So I told her she could “fuck off” if she thought I was going anywhere without her – we got into this mess together and I wanted us to cross the line together. 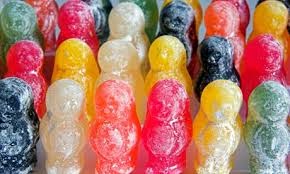 As it was, we both struggled.  The distance between each mile-marker seemed never ending.  Sue was struggling with her chest and breathing.  By about half way through, my left hip and knee were painful and even the ex-bad foot was a bit sore.  The middle third of the race is a bit of blur, punctuated by pauses for cups of water (very messy) and people giving us jelly babies. 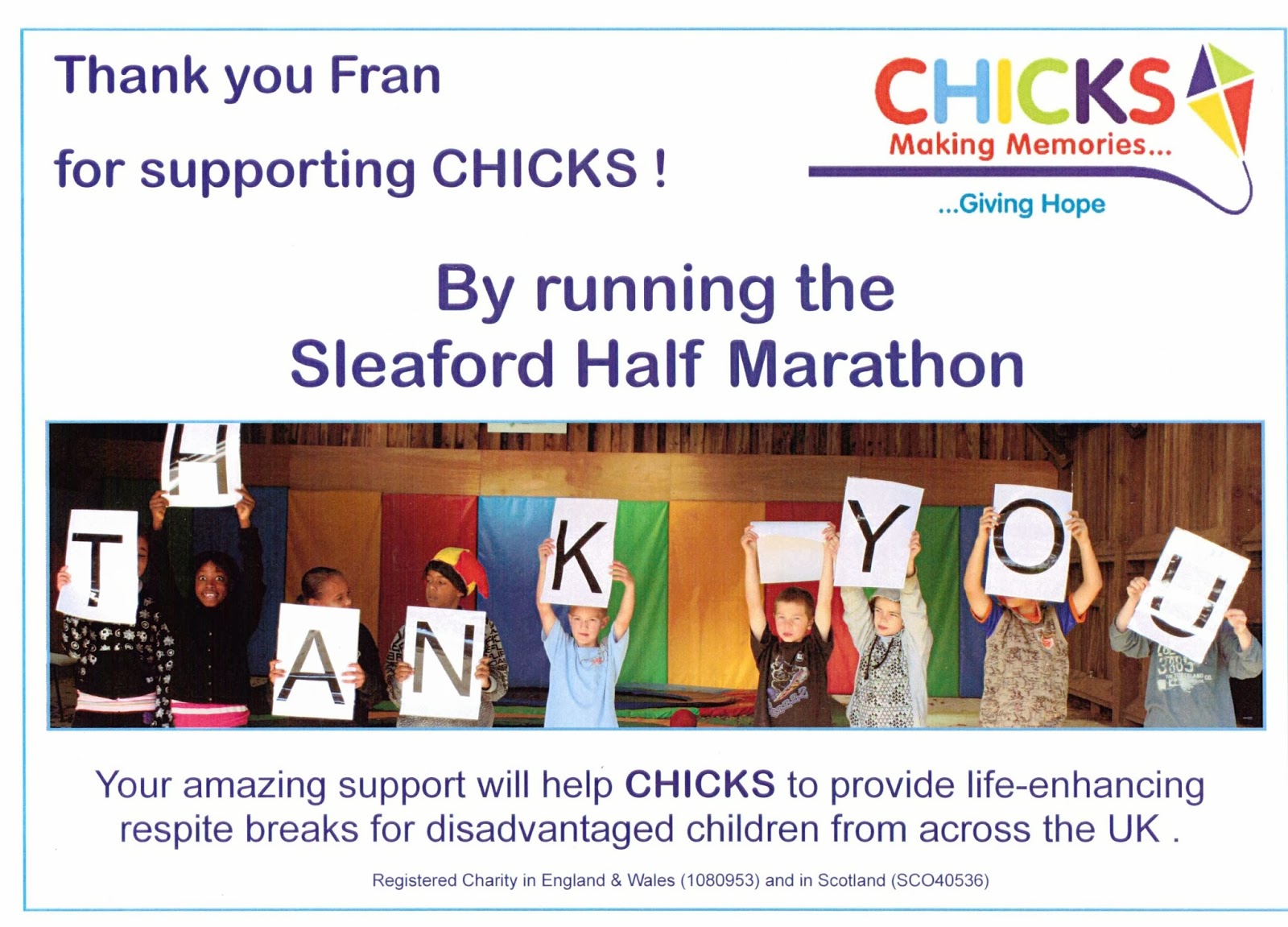 For the last third, I was in a lot of pain, but kept chattering away because I really wanted to hold on to the ‘high’ of the (soon to be) achievement of running a half marathon.  I also kept in mind that as well as a personal goal, I was raising money for CHICKS (Country Holidays for Inner City Kids) and I didn't want to let them down, not to mention the people who had pledged money to sponsor me.

As I recall, we were both pretty knackered from about the half way point. From mile 10 or 11 onwards Sue had dreadful cramp and spasms in her legs.  Sue and I have very different approaches to pain.  I tend to go very quiet whereas Sue tends to be very loud!  I think that helped me, in some weird way.  Hearing Sue expressing her pain very vocally probably distracted me from my own.  I was so quiet about it, she didn’t even know I was struggling so much til after the race.  Somehow in denial of my own pain,  I pushed her to keep running – even if it was just a granny-tap – so that we could achieve our goal of keeping running all the way.  I don’t know how she managed it really.   But we made it and came over the finish line together, still running – just.

Jonny was already there, having finished a good 15 minutes before us and Chris was there, frozen to death, with the camera to capture the moment.  You can see the pain on Sue’s face.  On my face, the giddiness shows and there is no way I am going to let any physical pain take away the surprise (shock, even) and elation of being able to run 13.1 miles.
Something I've come to notice about myself is that no matter how hard the race is, I can always manage a wave / pose / smile when I see a camera!

It was at the end of this race that I had my first experience of what Sue and I have come to call, “runner’s brain.”  It’s mixture of exhaustion, confusion, disorientation, often rendering one unable to comprehend what anyone is saying.  So, as I was on the way to collect my goody bag and saw a woman standing there with empty hands held out expectantly, I had no idea what other people had been handing to her.  I could see that she was saying words to me, but I couldn't make any sense of what she was on about. She may as well have been speaking alien.  Something to do with chips.  I said I hadn't got any money and we'd brought our own food with us.  With that, her next words reached my ears and slowly made their way towards my brain:  “It doesn't matter, I’ll do it,” in a bit of a stern voice.  With that, she bent down and undid the chip timer on my ankle and threw it into a bag with all the others!  Let’s hear it for disposable timing chips.  Much less embarrassing.

In the end, given our inexperience, the way we rushed into it, the cramp, the cold, the pain, I reckon we gave a pretty good account of ourselves: 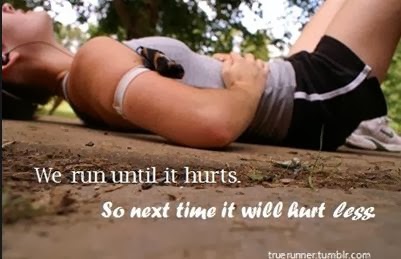