I have never thought of myself as being particularly inspirational, but have been given this compliment several times over the past year. I tend to think more about the people who inspire me rather than of me inspiring anyone.  When I was overweight, I was initially inspired by a colleague who abstained from alcohol during Lent.  This lead to me doing the same, which kick-started my weight loss and resulted in increased motivation.  Another colleague told me that she was inspired by my success and it helped her to realise that they could do it too. This lead to me writing a blog post about it and from there two other friends have been moved to join Slimming World and are doing well with their weight loss now. 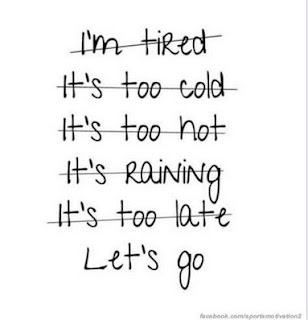 More recently, another colleague has said that my running, especially overcoming some difficulties, has motivated him to improve his fitness and start running again – something he hasn’t done for quite a few years.  That set me thinking about and really acknowledging to myself what I have achieved.

Click here to see my 2011 notes on the benefits of having a 'running buddy' and the importance of building personally meaningful motivation.

A lot has has happened since then, so I'm working on the story of my 'running journey' from being barely able to run half a mile, to completing a half marathon. I’ll include how I overcame a couple of set-backs and let you know about the free running tools that have helped and inspired me.  That's it - I'm committed now; I'd better get on with it.